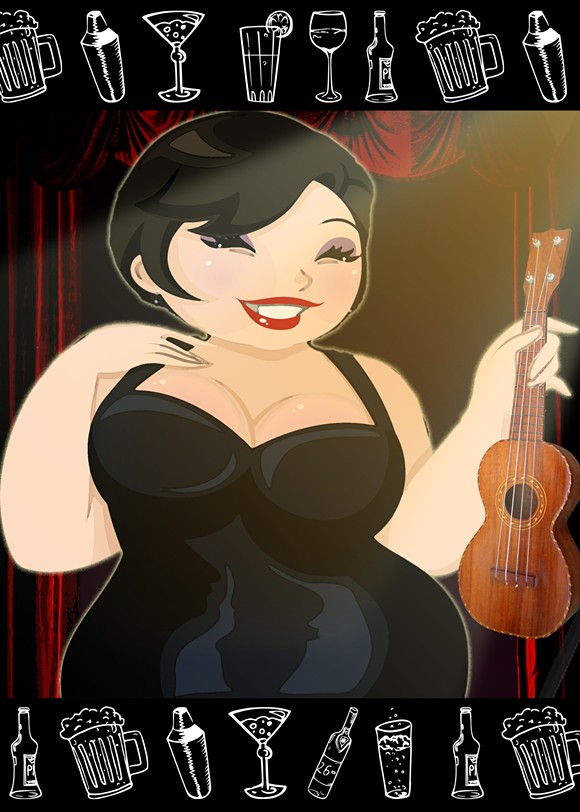 Part pop cabaret, part psychological intervention, Angelina Sings introduces playwright/actress Nicole Antonia Carro's newest creation, a Pinot Grigio-guzzling chanteuse who holds court in a suburban New Yawk Knights of Columbus hall since being legally barred from her family's ristorante after a brawl with her ex-husband's baby momma. With her disheveled 60s up-do, a kazoo tucked into her considerable cleavage, Angelina Fazzoli-Schultz (Carro) is like a plus-sized Amy Winehouse (whose "Wake Up Alone" she covers on the ukelele); except instead of saying "no, no, no" to rehab, she said "yes, your honor."


Angelina is accompanied by Sister Rosemary DeNardo (Erik Branch in an absurd wimple), an ivory-tickling nun with a swear jar that becomes the focus of the show's funniest running gag. Together the pair tear through a dozen-plus tunes from Billy Joel, Burt Bacharach, and Elton John. Carron makes the familiar standards her own with her bold, brassy voice, cleverly transforming "Someone Saved My Life tonight" into an ode to birth control pills. We only get glimpses of Angelina's backstory in the brief banter between numbers, and some transitions are as simple as a bellowed "Next song!" But there's just enough of a throughline to demonstrate that Carro has created more than a campy charactature, but rather developed a genuine character. Angelina's bottoming out isn't just a tuneful trainwreck, it's also surprisingly touching.