Fringe Review: 'So You Say You Want a Revolution' 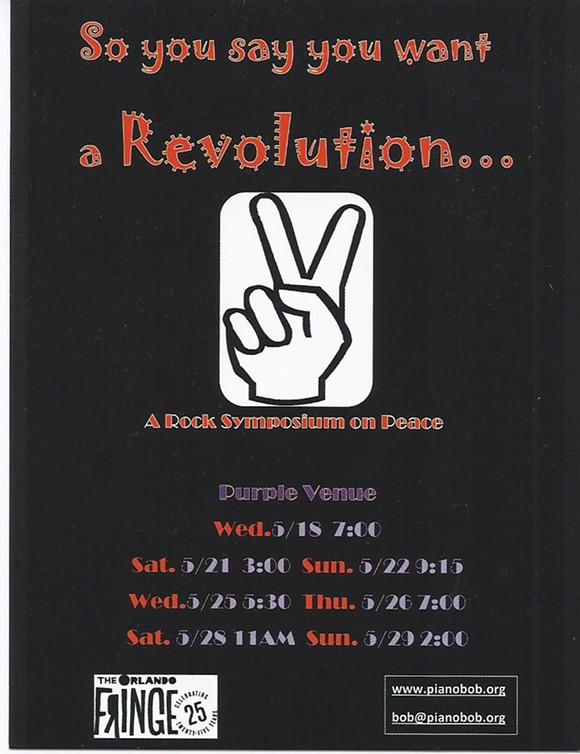 If you remember the 1960s (or have at least done hallucinogens and pretended you were there) the music and message of So You Say You Want a Revolution will likely provoke powerful nostalgia for a time when it seemed like a song could change the world. In today's more cynical age, it may sound ludicrous to expect pop songs to spark societal change, but groups like the Beatles were once regarded as spiritual gurus by the anti-war movement.

Robert "Piano Bob" Azzarito is a retired schoolteacher, lifelong rock & roll fan and passionate peacenik; even though he looks a little like a hippie Hitler in his red shirt and black armband, he seems like a genuinely nice guy. So at the risk of sounding like "the Man," I was disappointed that his cabaret/TED Talk on '60s protest music and modern-day politics didn't have more intellectual depth or entertainment value. Bob's presentation shifts between a rambling PowerPoint lecture on welfare statistics and education reform and a lounge act covering several of John Lennon's later, lesser-known works, like "Working Class Hero" and "Gimme Some Truth," with the occasional jarring jump to Stevie Wonder or Supertramp.

As a musician, Azzarito has a jaunty touch on the keyboard, but his pipes are passable at best and pitchy at worst. As a peace evangelist, I admire his heartfelt enthusiasm (and personally agree with many of his opinions) but am pained to admit that his symposium deals almost solely in substance-free clichés. By the end, Lennon's lyrics are reduced to feel-good aphorisms on an inspirational cat poster; when the tent-revival ending arrived, I wondered aloud if we could please just have our revolution without audience participation. Ultimately, this presentation (it's a stretch to call it a show) reminded me of certain populist candidates currently running for president: full of sound and fury over our failings, but offering nothing but hollow platitudes in place of practical solutions.