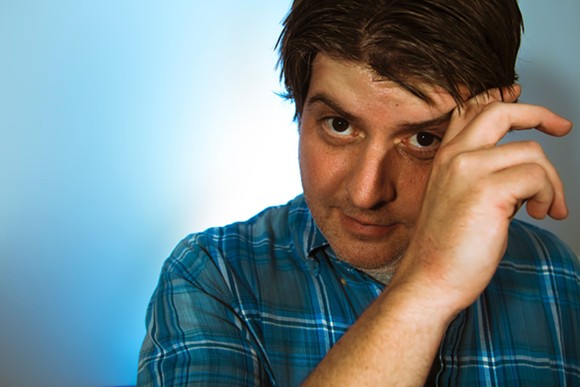 Stand-up comic Stewart Huff had recent Fringe audiences rolling in the aisles with his hilarious monologues Donating Sperm to My Sister's Wife and Darwin vs. Rednecks, but his latest work will make you stretch your brain as well as bust a gut. Sense Ain't Common, which Huff previewed in Orlando back in March, is a fast-paced comedic survey of some of the dangerous ideas that have been getting scientists and free-thinkers beaten and burned since civilization began. Huff delivers his hillbilly philosophy in a gravelly drawl that softens the horror of his histories, as he shares tales of people like Alan Turing, martyred in the quest for knowledge by upright apes operating out of intolerance and fear.

Even though Huff is a product of Kentucky, whose education system is "53rd in the country," he's sharp enough to recognize that "fences don't stop human beings," and "hitting an angry man doesn't calm him down," both lessons lost on many of our leaders. Don't be intimidated by the deep subject matter; though most people may be "more scared of being wrong than interested in being right," Huff candy-coats his information with fabulously filthy turns of phrase and fascinating factoids – for instance, were you aware that you can get high on reindeer urine? He sometimes gets a rough reception when he plays the Southern states (his hour-long show at University of Kentucky in Lexington was halted after only 18 minutes) but at Orlando Fringe Huff is sure to draw capacity crowds eager to laugh as well as listen and learn.