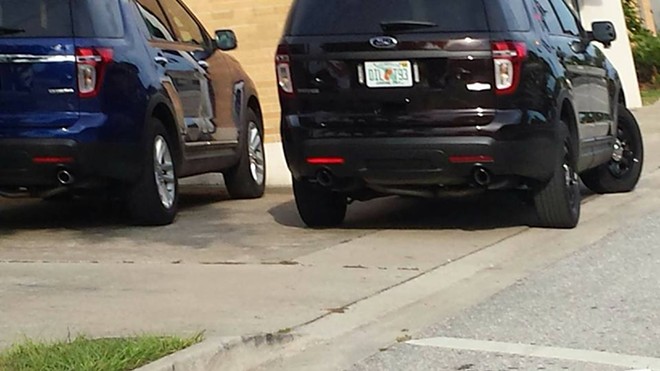 Last week a Florida police chief shamefully himself after being called out on social media for a seriously crappy parking job.

The power of a viral social media post called attention to Groveland Police Chief Melvin Tennyson’s parking violation on May 10.

The Facebook-wielding vigilante, David Bires, posted photos of the egregious parking job, noting that residents were being fined $40 tickets if they blocked the sidewalk while parked in their own driveway and that the police chief shouldn’t be immune to the parking rules.

Chief Tennyson said he was attending a meeting at City Hall with City Manager , and haphazardly parked alongside the walkway without realizing he had blocked it.

During the meeting, he received a call from one of his road supervisors, who let him know he done messed up.

Once the Groveland department was made aware of Chief Tennyson's parking violation, Chief Tennyson issued himself a parking fine, supposedly, before he even noticed the Facebook post, the Orlando Sentinel reported. In case anyone doubted his story, Groveland Police Department showed proof of his honorable self-retribution by posting the payment receipt.

In his written statement, Chief Tennyson made it a point to emphasize that he doesn't feel he can hold anyone accountable to the law without first holding himself accountable.

"The reason I have done this is due to the fact that we enforce our parking violations as well as all laws and city ordinances…" Tennyson wrote. "I hold anyone accountable until I hold myself accountable and as I have always said it starts at the top."