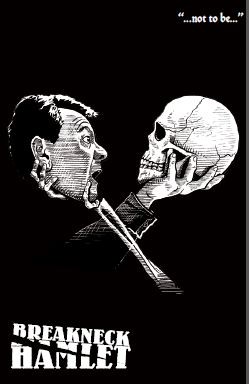 Actor-educator Timothy Mooney has been an Orlando Fringe fixture for years with his one-man productions of classic texts, and this year's Breakneck Hamlet finds his disposition at its most entertainingly antic. Mooney cleverly condenses the Bard's best and longest tragedy down to an airtight 60 minutes, narrating the action scene by scene with a bit of wry commentary, and acting out the demented Dane's most famous soliloquies.

In the program notes, Mooney argues that Hamlet doesn't suffer from indecisiveness, as most interpreters assume, but rather ambivalence. It's an interesting analysis, but it was difficult to see how it informed the actual performance, which is too fast-paced to allow much time for nuance in the characterizations.

Even so, Mooney is exhaustingly impressive to witness as he dashes between multiple roles, dressed in a natty doublet (designed by Kathleen Conery) that's damp with perspiration by the climactic swordfight, deep-set eyes practically popping from his skull with dramatic passion. If your only exposure to this masterwork has been Mel Gibson and Ethan Hawke movies, do yourself a favor and see Mooney's take – if nothing else, you'll finally get to enjoy Shakespeare's words with impeccable enunciation.