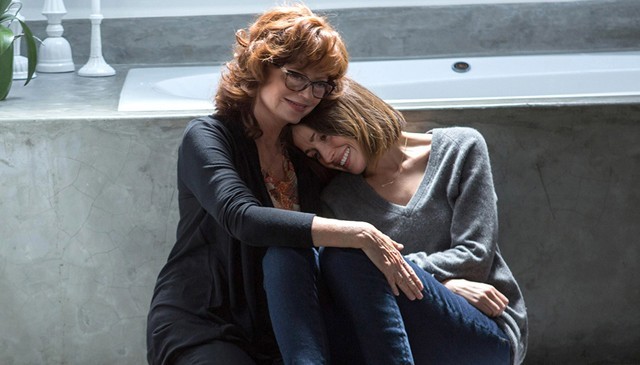 With a trite title and an overused premise, writer-director Lorene Scafaria’s second film could have been both literally and figuratively sophomoric. But thanks to some unexpected maturity and sweetness, and three good performances, The Meddler is the filmmaker’s sophomore project in chronology only.

Susan Sarandon (in perhaps her best performance since 1995’s Dead Man Walking) is Marnie, an overbearing mother whose husband has recently died. Lonely and longing to be closer to her only daughter, Lori (Rose Byrne), who is an up-and-coming screenwriter in Los Angeles, Marnie packs all her belongings (New York dialect included) and moves from the Big Apple to Tinseltown.

Not content at the occasional pop-in, Marnie meddles with Lori’s life in almost every way. She encourages Lori and her ex-boyfriend to get back together, quizzes Lori’s psychologist about the details of her daughter’s therapy, befriends Lori’s casual acquaintances and even goes so far as to plan and pay for the elaborate wedding of one of her daughter’s friends.
When Lori encourages her mom to get a hobby, she responds, “Maybe you could be my hobby.”

But smothering her daughter isn’t enough for Marnie, as her need to be needed extends to virtually adopting a 20-something Apple store salesman (who may or may not be in need of life advice) and comforting sick patients at a hospital, even if the patients don’t need comforting. Yet few of these episodes depict Marnie as a monster, or as a vehicle for cheap comedy. Instead, Scafaria and Sarandon paint her with a realistic brush, allowing us to get inside her head and understand her motivations.

One aspect of The Meddler that is both annoying and rewarding is its lack of traditional structure. Rejecting a three-act format, the film meanders, content to leave some events partially unresolved. For instance, Marnie crashes her car, has her car stolen, gets embarrassingly high, receives a part as a movie extra and gets arrested, but none of those episodes is fully wrapped up. Yet, surprisingly, what at first glance seems like either sloppy writing or editing also appears, on second glance, somewhat consistent with the rest of the movie, and with Marnie’s life. In short, the structure is both messy (in a traditional narrative sense) and nicely subtle (in a French New Wave way).

The film’s third good performance belongs to J.K. Simmons, who enters in much the same way as Sam Elliott did in Grandma, providing a burst of energy and warmth. Heck, Simmons even looks and sounds like Elliott. And though there are no scenes with all three lead actors, they still comprise quite an ensemble and allow one to overlook the script’s contrivances. (It’s just too bad that Scafaria didn’t use Lucy Punch and Michael McKean more effectively.)

If you’re looking for a dramedy that captures the highs and lows of a mother-daughter relationship, skip Garry Marshall’s Mother’s Day and instead soak in the honesty, awkwardness, love, vulnerability and, yes, even the meddling of Sarandon’s Marnie.