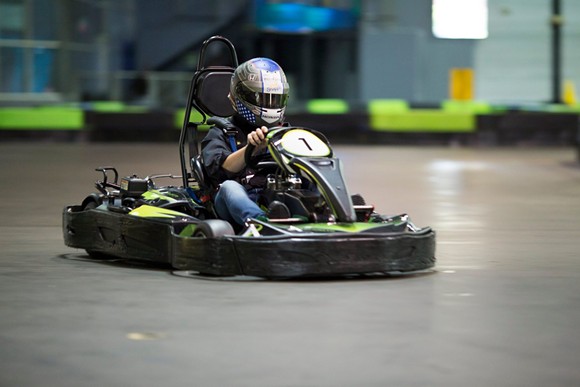 Building on the success of the popular I-Drive NASCAR Indoor Go-Karting attraction on North International Drive, a new go-kart concept is now in the works for the tourist district.

Andretti Karting will be building a brand new $30 million indoor go-kart facility on Universal Boulevard near the convention center. The new facility will feature electronic go-karting along an elevated track that will race along large windows looking onto Universal Boulevard in a building that sits near the road with parking behind it. A Mario Andretti racing car will also be on display out front of the main building.

Along with the go-karting, Andretti will also feature zip lines, bowling, racing simulators, a ‘sky bar,’ rock climbing, laser tag and a full-service restaurant. 7,000 sq. ft. of meeting space is also planned for the facility.

The new facility will be next to TopGolf with their golf range sitting partly behind Andretti’s facilities. The two attractions will work together some, but most of those details have yet to be announced. Like Andretti, TopGolf will feature on-site dining, an arcade and bowling.

Andretti should be a familiar name to most locals. The company was founded in 1999 when it opened an outdoor family entertainment center in Melbourne. Another location, the company’s first indoor track, opened in 2001 in Roswell, Georgia. There’s another location in Marietta, Georgia opening soon. The Universal Boulevard location will become the company’s flagship. It’s expected to break ground this summer with an opening planned for Spring 2017.