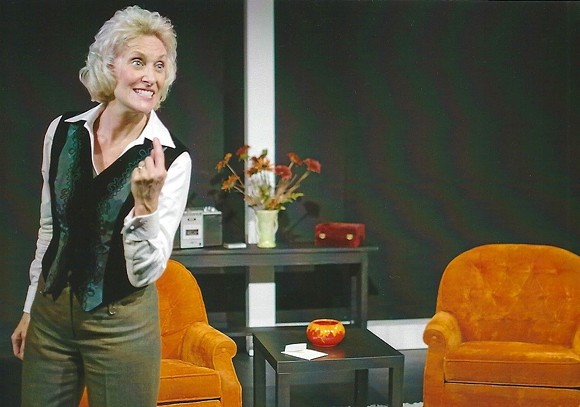 One-person Fringe shows are often a gamble, especially when you know little about the actor and show beforehand. But Blonde Poison, in which charismatic Oregon actress Carol Adams portrays Jewish Nazi-collaborator Stella Goldschlag, is a gamble worth taking.

Goldschlag was just 17 when World War II broke out, and though she rejected much of her Jewish heritage and claimed that the Orthodox Jews of eastern Germany “were never like us,” she too was eventually forced to hide from the Nazis, and subsequently captured and tortured. But when offered the opportunity to inform on her fellow Jews, she made a horrendous decision that would haunt her for the rest of her life.
“It’s not my fault,” she argues. “I’m guilty because I survived?”

The play never succinctly answers that question, prodding us to instead ponder how we’d react if the Gestapo offered us a similar deal with the devil.

Written by Gail Louw in 2015 for the Verona Studio in Salem, Oregon, and receiving its East Coast debut at Orlando Fringe, the play is dramatically and thematically challenging for both audience and performer. Adams is more than up to the task, though, thanks to her strong stage presence and her grasp of the complex material. The well-executed set, lighting and sound designs add credibility to the piece, too. Admittedly, the first half drags slightly, partially because of the setup, which involves Goldschlag reminiscing about her life prior to an interview with a journalist in 1983. (Adams’ German accent could use tweaking as well.) But if you have the patience and emotional strength for the material, add this to your must-see Fringe list.