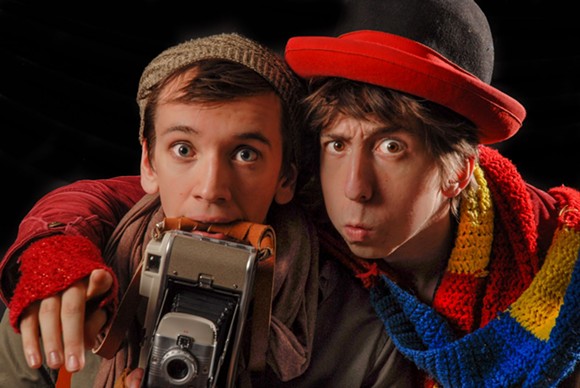 Joshua ‘Mime’ Palmer is a drab hobo clown with Frank N. Furter eyeshadow; Benjamin ‘Juggler’ Domask is a glam-rock harlequin in a Tom Baker Dr. Who scarf. Together, the pair presents an hour of circus stunts and silent skits in an effort to one-up each other's showmanship, as the frenemies fling Doritos, flop on the floor, and generally flail about the stage.

It's a slender thread to hang an hour show on, and while their antics generate plenty of gentle chuckles, there are few big laughs to be found for the sophisticated viewer. Domask, who was half of last Fringe's delightful Dinner and a Show, is by far the stronger performer of the two, demonstrating some unusual juggling passes with flair. Palmer is a champion monologist, but his pantomime skills are merely average at best. Though the description advertises stunning visuals and original music, but I saw precious little of either.

About fifteen minutes from the end, the duo finally discover their script, and the tone shifts as an incident breaks the silence and their friendship, culminating in a slapstick swordfight. Unfortunately, by then it was far too late for me; while the show is unobjectionable as family-friendly fare, as an adult I frequently found my attention wandering. With this loosely structured production running short of ideas long before the arbitrary ending, at least Juggler & Mime demonstrates why Cirque du Soleil's silent clowns are confined to preshows and transitions, and not asked to carry a whole show on their own.