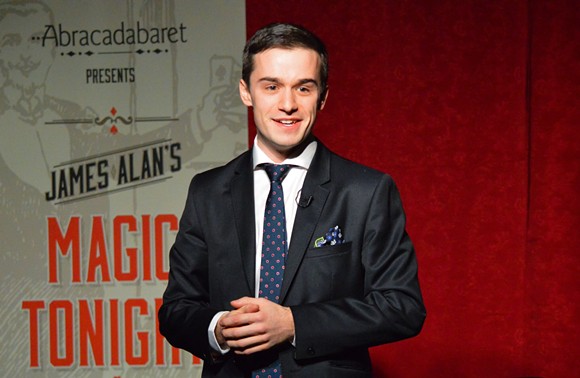 Amid the growing mob of magicians at the Orlando Fringe, Keith Brown stands out for having the show with the most straightforward concept: no dark personas, tortured storylines or attractive musicians; just a skillful performer and his astounding tricks. If you saw Brown's previous Fringe appearance, you've already seen his showstopping needle-swallowing stunt, but this time it's given added oomph by projections of his X-rays and surgical endoscopy after an earlier attempt that went awry.

Before he arrives at that heart-stopping finale, Brown proves a sleight-of-hand savant; despite boyish features and a voice that still cracks with adolescent enthusiasm, he displays a more mature mastery of close-up magic than most of the headliners I've seen on the Vegas Strip. His quarter-in-a-beer-can effect is flawless, as is the one where he skewers a selected card inside a sealed bag. Brown is equally effective as a mentalist; I'm notoriously uncooperative with mind-reading tricks, but he read me with eerie accuracy.

One trick takes a mid-routine detour into a family anecdote that's charming but drags on too long (suspiciously so), and an innovative effort to integrate the audience's iPhones into his final effect was frustrated by the building's limited internet (AT&T is particularly useless inside Shakes). But those are small flaws against the finesse Brown demonstrates at his art, and the friendly, unassuming way he shares his love of it with his audience.