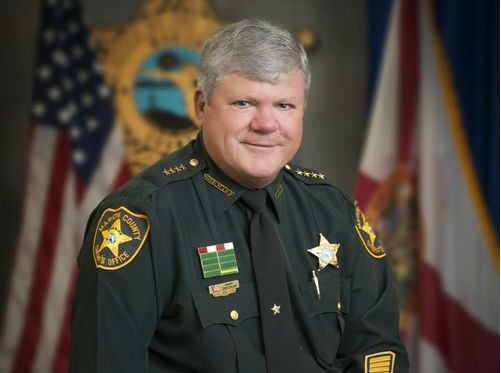 Marion County Sheriff Chris Blair was arrested Friday afternoon after being indicted on two counts of perjury and one count of official misconduct.

The Ocala Star-Banner reports the charges stem from a grand jury investigation of the agency's deputies to decide if any "wrongdoing, like excessive force, was systemic." When Blair appeared before the grand jury, he "knowingly testified falsely" in the case of Dustin Heathman, the indictment says, according to the Star-Banner.

During a six-hour standoff with the SWAT team in 2014, Heathman shot at deputies and later alleged they beat him. Blair, who was on the scene, told the grand jury he saw the back of Heathman and didn't get a chance to see the injuries on his face, the Star-Banner reports. But the indictment alleges Blair lied because as Heathman was escorted by two deputies with injuries on his face, Blair was so close to him, he had to take a step back to let Heathman and the deputies through.

The Star-Banner reports this isn't the first time Blair's deputies have faced scrutiny:


"His tenure has been dogged by accusations that deputies used excessive force and then lied about it.

Four former deputies have been sentenced to federal prison for their roles in the beating of drug suspect Derrick Price. A fifth man in that case was acquitted in criminal court but released by the Sheriff's Office.

Other deputies have been investigated, disciplined, and sometimes released from the agency. Blair has maintained that there is no “culture of violence” within his team, and points out that he always takes immediate and firm action when made aware of potential wrongdoing."


Blair was taken to the county jail Friday afternoon and bonded out quickly, according to the Marion County Sheriff's Office.

In a statement on Facebook, the agency says it "will be gathering information and will be following up in the foreseeable future. The MCSO is going through an immediate transition and will provide further information in a responsible and timely manner."