!!! dazzles as both themselves and a Stereolab tribute band (The Social) 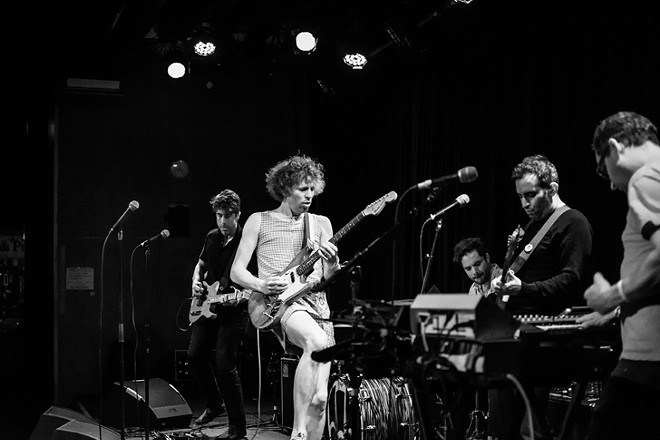 When it comes to cover bands, there are bad ones – oh so many bad ones – and there are good ones. But great? The derivative nature of the very idea all but precludes such a laurel. Stereolad (May 26, The Social), however, may be the coolest cover-band concept there’s ever been.

Stereolad is Sacramento alternative dance-rock band !!! opening for themselves as a Stereolab tribute band, in a take that packs both fidelity and humor. Even with more volume and horsepower, they were fairly faithful to the motorik drive and organ vibes of the source material. Their interpretation sounded great, actually – something, truth be told, I could get down with on a more daily basis.
Frontman Nic Offer even lived the gimmick far enough to go drag in a requisitely coquettish dress and adopting a bad French accent, like maybe Laetitia Sadier with more rockist tendencies and hairier legs. Well, something like that. But his famous energy could only be contained so long, going a little Iggy Pop at the end of the set there. 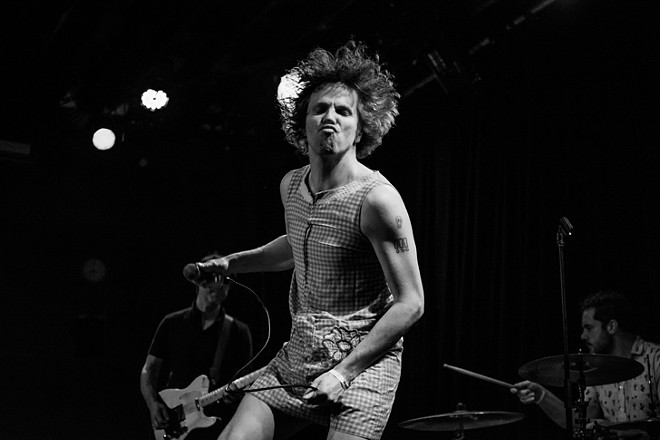 Inventive and uproarious, Stereolad’s opening set actually took the room all the way from zero to 60. Hell, when have Stereolab themselves ever done that?

Then !!! took the stage and shot the club to the moon with a glitter bomb of funk, house and rock. Few can maintain such a forward artistic gaze while keeping it as straight funky as this outfit. What makes them so exceptional as a band – and especially a live act – is that they’re brainy but never at the cost of booty-bumping fun. 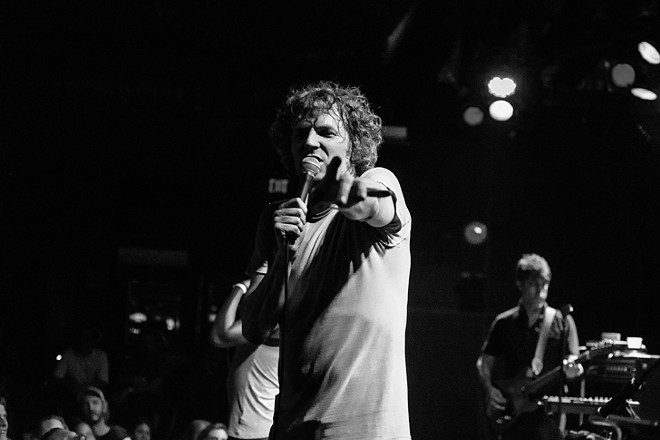 But it is unquestionably the Pied Piper power of Offer’s irrepressible Jagger-esque presence that leads the party and turns the whole house into a rubbery sea of lost inhibition:

Yes, this is him dancing on the bar:
From the stage to the floor, everyone was all out with zero self-consciousness. It was just about as pure of a vibe as it gets, the kind of total dance fever seen more in da club than at live concerts. I’ve been to raves with less spirit than a !!! show. 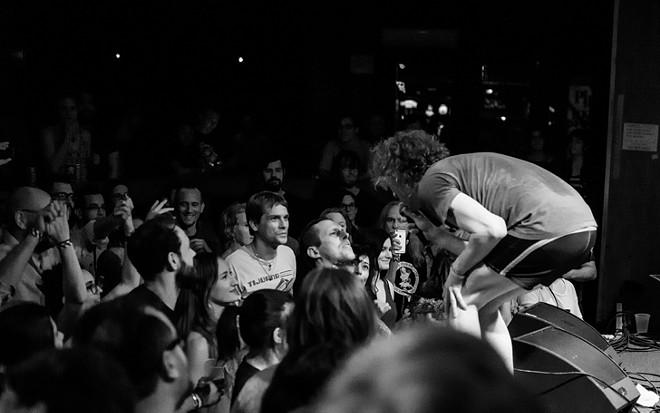 Their genius, however, is that they take the primal idea of unchained, goofy fun and push it to transcendence. A fan actually walked up to Offer mid-song just to embrace him. That’s some cool shit. And that’s why !!! is the best disco band alive.

Side note: On behalf of all non-tall people, consider this an open plea to the Social to put the riser level on the window side of the club back in.