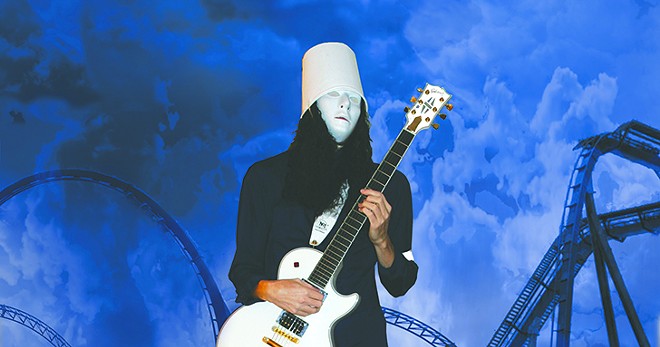 Outsider guitarist Buckethead occupies such a strange place in the rock music landscape that we feel almost duty-bound to make this a show selection for the week. A virtuoso guitarist with undeniable classical chops, Buckethead is never seen without a white Michael Myers-esque mask and a bucket of some sort (often of the KFC chicken variety) perched atop his long mane. He also is known to get down with nunchucks during his performances. A creative workaholic who has recorded over 200 albums of his own work, he has collaborated with Bill Laswell and Bootsy Collins, but on the other hand he was a member of Guns N' Roses during the Chinese Democracy years (bucket firmly on head the whole time). Although we suspect that years from now we'll find out that he had everything meticulously planned out, like a hybrid of Michael Schenker and the Residents, in the meantime, just enjoy the show.