Former New Mexico Gov. Gary Johnson represents the Libertarian Party's best hope for a viable candidate to the U.S. presidency. Though many Americans don't know his name, Johnson has polled at 10 percent in two national polls against Hillary Clinton and Donald Trump.

But on Saturday's night five-way presidential debate at the Liberty National Convention in Orlando, Johnson was repeatedly booed by the "Libertarian wing of the Libertarian Party."

Johnson was loudly booed for saying he would support people getting licenses to drive and replacing income taxes with a flat tax or consumption tax. He was booed again when he said the free market, not the government, is responsible for the decline of coal companies and for pushing for charter schools instead of dismantling the federal Department of Education. And he received the longest boos from the raucous crowd when he said he would have signed the 1964 Civil Rights Act, a huge no-no in a room of Libertarians who believe business owners should have the freedom to discriminate.

Johnson's hardline competitors on stage, including Austin Petersen, John McAfee, Marc Allan Feldman and Darryl Perry, rarely got that kind of feedback from the crowd. Johnson, who ran for governor as a Republican, has been branded by some in the socially liberal, fiscally conservative party as "Republican-lite." 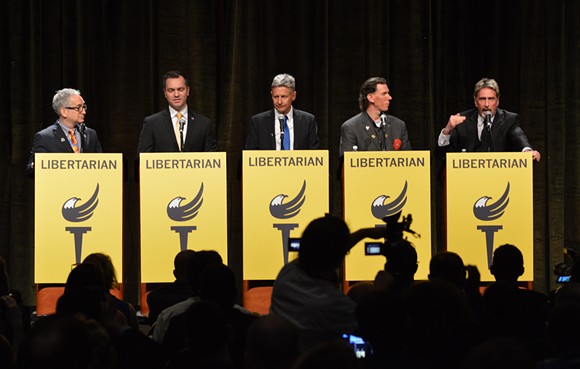 The Libertarian candidates agreed most of the time, though. They were against presumptive Republican nominee Donald Trump's call to deport 11 million undocumented immigrants and called for abolishing the Federal Reserve, more free trade, no government rules regarding marriage and the end of treating drug use as a criminal act.

“When Donald Trump talks about deporting 11 million illegal immigrants, that’s just wrong," Johnson tells the crowd. "When he talks about building a fence across the border, that is just wrong...He’s wrong. He’s wrong!”

Most of them came out as pro-abortion, though Petersen took a noted turn when he came out as anti-abortion, saying the rights to freedom begin at conception.

Again, Johnson stood out from the pack when he didn't answer whether the Democratic Party or Republican Party was more evil. He took a conciliatory tone, saying he wants to work with the parties when he's elected president.

"I thought my marching orders were to grow the Libertarian Party," Johnson, in reference to his 2012 run for president, says in his closing statements. "Shouldn't we sign up to anything that makes things better, that creates more freedom?"