According to poll, half of Florida voters want Rubio to run again 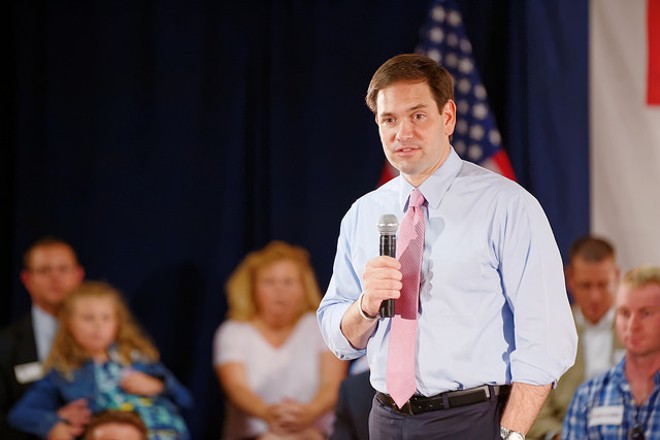 With his campaign backed by many top state and national Democrats, U.S. Rep. Patrick Murphy on Monday formally submitted candidacy papers and a check to run for the U.S. Senate as pre-qualifying opened in Tallahassee.

Still, Murphy, a two-term congressman who was the beneficiary of a fundraising event Friday in Miami that featured President Barack Obama, remains unknown to many Floridians as do the other major Senate candidates from both parties.

"I think as people start looking, you know, beyond the presidential (race), as there is more clarity as to who the nominees are, people will start to look down ballot," Murphy told reporters after paying a $10,440 qualifying fee. "We're doing the best we can. I do as many events a day as I think humanly possible trying to meet voters."

The poll also found that nearly half —- 49 percent —- of likely Florida voters said they think U.S. Sen. Marco Rubio should go back on his pledge of not running for re-election. Rubio decided against seeking another term in the Senate as he ran for president. But after failing to win the GOP presidential nomination, he has faced pressure to run again for the Senate.

"If he decides to do so, he would clearly be the strongest candidate, as none of the current contenders appears to have caught fire with state voters," Mason-Dixon pollster J. Brad Coker said in a prepared statement.

Rubio has not taken such a step as his longtime political ally, Lt. Gov. Carlos Lopez-Cantera, remains a candidate for the Senate seat.

Lopez-Cantera scored 9 percent of the GOP primary vote in the Mason-Dixon poll, where he was deemed favorable by 10 percent of the likely Republican voters yet unrecognized by 67 percent.

Home builder Carlos Beruff drew 17 percent of the support from Republican voters who were asked for their choice if the Aug. 30 primary were held today. U.S. Rep. David Jolly was at 13 percent, U.S. Rep. Ron DeSantis scored 10 percent, and businessman Todd Wilcox was fifth with 2 percent.

Beruff, who has drawn some criticism for calling Obama an “animal” during a speech last month, had a 9 percent unfavorable rating from likely Republican voters, the highest among any of the GOP candidates. Beruff also was unrecognized by 43 percent of those polled.

Jolly was unrecognized by 57 percent, DeSantis by 60 percent, and Wilcox by 79 percent.

The poll found 77 percent of Republicans want Rubio to seek to retain his seat, while 16 percent did not.

Meanwhile, 48 percent of independents were in favor of Rubio seeking a second term and 37 percent were opposed. Among Democrats, 25 percent wanted Rubio to run for re-election, while 62 percent said he should not.

For Keith, 75 percent didn't recognize her. Of those who have heard of Keith, 6 percent viewed her favorably, with just 3 percent unfavorable.

The formal qualifying period runs from noon June 20 through noon June 24 for congressional and legislative candidates, along with those seeking county offices and special district seats. But starting Monday, those candidates were able to submit qualifying papers and fees.

U.S. Senate candidate Tony Khoury was first in the Tallahassee office with a check for $6,960, the amount people running without party affiliation for the seat must pay to be on the November ballot.