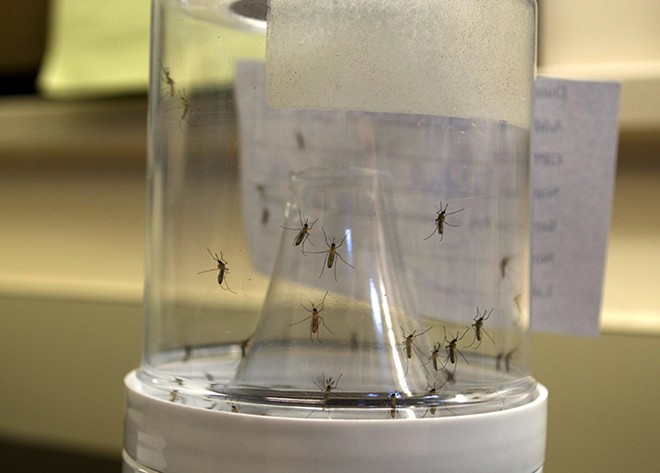 As Florida and the rest of the nation seek solutions to the Zika virus, one company wants to try a new method in a Florida Keys neighborhood to beat the spread of the disease—genetically modified mosquitoes.

It might sound like a science fiction movie, but the British company Oxitec is working with the Florida Keys Mosquito Control District to get approval from the U.S. Food and Drug Administration on a trial release of 3 million modified Aedes aegypti mosquitoes in Key Haven. The FDA already examined the issue and found no significant impact, but is still reviewing public comments before approving the trial. Understandably, some residents are a bit wary about the idea.

So how do they work? Oxitec's male mosquitoes have a self-limiting gene, which means when they mate with wild female mosquitoes, the offspring die before they reach adulthood and can reproduce, says Matt Warren, spokesperson for Oxitec. With more successful releases, the native mosquito population is decreased.

Warren says the company has done several successful trials in Brazil, Panama and the Cayman Islands. The Florida Keys Mosquito Control District approached the company in 2010 to find a better method to control outbreaks of the dengue virus.

The genetically modified mosquitoes also have a fluorescent gene marker that lets scientists identify their mosquitoes in the field and in the larvae stage. After a few weeks, the self-limiting Oxitec mosquitoes should disappear from the environment, Warren says.

Could these genetically modified mosquitoes be released in Central Florida? The short answer is no, at least not yet.

Kelly Deutsch, acting manager for the Orange County  Mosquito Control Division, says you won't seen genetically modified mosquitoes locally in the near future because the project has not been approved by the FDA and would have to undergo a number of trials before it could happen. Warren adds that Oxitec isn't looking to unleash its mosquitoes on the rest of Florida right now.

"At the moment we're just concentrating on Key Haven because that's the area we've applied to do the project in," Warren says. "We would have to submit more applications to the FDA to expand."