The musical DNA of Jim Jarmusch's 'Down By Law,' screening tonight 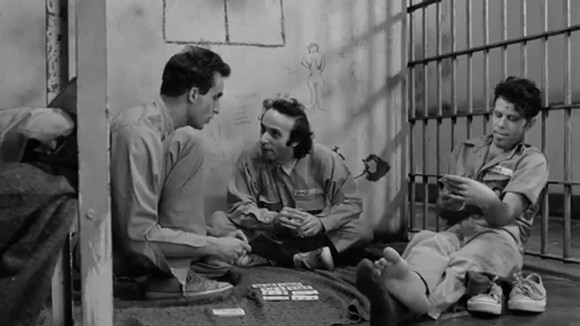 The latest installment in the More Q Than A film series, going down tonight, is the Jim Jarmusch classic Down By Law. The swampy noir film stars Tom Waits, John Lurie and Roberto Benigni (along with Ellen Barkin), and is a treat for both cinephiles, but also for heavy music fans due to both the casting and soundtrack courtesy of John Lurie's Lounge Lizards and Tom Waits.

This movie is an early highpoint of Jarmusch as far as using innovative musicians both in acting roles and for soundtrack duties (something he would do again and again).

We spoke to More Q Than A's Kyle Eagle about the sonic end of this film ...

For starters, Down by Law stars Tom Waits, but there is another very well-regarded musician in a lead role. Who is John Lurie?
John Lurie is a musician closely associated with the No Wave and NYC underground of the 80's. His band the Lounge Lizards is now in the classic status and continue to this day- they had a triumphant reunion last year with Flea of the Red Hot's as an additional member. The Lounge Lizards started as a result of providing music for Jarmusch.

Lurie also handles the soundtrack and it's an essential part of the noir mood of the film - but that's often the case with Jarmusch films, isn't it?
Music in Jarmusch's films is like additional dialogue and characters if you ask me. It moves the story along and acts as accentuation marks. Jarmusch has so many scenes in his films that burn a multi-dimension impression on one's memory because of the tunes used. Scenes from Dead Man, Mystery Train etc all flash before my eyes just thinking about it.

Jarmusch has become a director who very carefully chooses his soundtracks and more often than not includes musicians in roles in his films, hasn’t he?
Music is such an integral part of the overall feel in Jarmusch's movies. I think it's great that he puts real musicians in key parts - and does it well. Many directors try this and don't pull off. Plus Jarmusch will use hardcore cats like Screamin' Jay Hawkins, Iggy Pop, Gibby Haynes and such. People who love music love his movies, and get a kick out of seeing them on screen - often in small cameos. "Hey, wasn't that so and so??!?!?"

Down By Law screens tonight at Gallery At Avalon Island at 7pm.