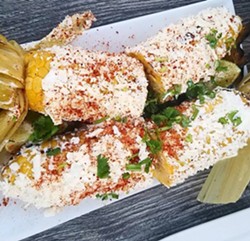 If you've ever been to Mexico (especially Mexico City), you'll know that this moniker isn't some kitschy attempt to tap into the food truck trend. Aside from tacos, Mexican street corn is really one of the best things you could possibly eat from a cart when you're south of the border (or in SoCal).

Saint Anejo in Winter Springs is doing it best these days, slathering Zellwood sweet corn in crema (in Mexico, they just use mayo) and crumbly cotija cheese, then sprinkling liberally with chopped cilantro and Tajin, the tangy, spicy chile-lime-salt blend that goes just as well on these ears as it does on the rim of an ice-cold chelada glass. The only real difference between these ears and the real thing is the type of corn served in Mexico, a much starchier white variety, as opposed to the sweet, juicy kernels we're used to. But that's neither here nor there — they're both muy rico.

A plate of four half-ears is only $7, so it's highly suggested you forgo the guac (it's great, but you can get good guac almost anywhere these days) and order these guapos instead.