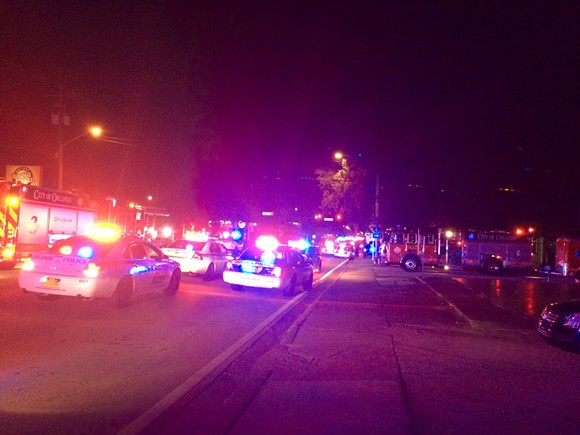 Gunfire broke out at Pulse Nightclub just hours ago. As many as 20 patrons may have been injured, and fleeing clubgoers reported a shooter with an assault rifle, possibly "wearing a bomb."

At 2:30 a.m., the nightclub posted "Everyone get out of Pulse and keep running" on its Facebook page. Ricardo Almodovar posted, "I was there. Shooter opened fire @ around 2:00am. People on the dance floor and bar got down on the floor and some of us who were near the bar and back exit managed to go out through the outdoor area and just ran."

Orlando Regional Medical Center, which is near the club south of downtown, said it received "several gunshot victims" and that the hospital had been locked down "out of an abundance of caution" in a statement released at 5 a.m.:

"Orlando Regional Medical Center was placed on lockdown around 2 a.m. after receiving several gunshot victims. Only essential workers are being allowed access into the building."

Orlando Police are containing the scene, and around 5 a.m. tweeted that they had done a "controlled explosion" inside the club, lending credence to those reports of an explosive device worn by the shooter. Media outlets around the world have reported deaths, explosions and a shooter roaming the hospital, leading OPD to issue a terse request for everyone to stop theorizing.

That sound was a controlled explosion by law enforcement. Please avoid reporting inaccuracies at this time.

This mass shooting coming just over 24 hours after Christina Grimmie was shot at the Plaza Live by a stalker carrying two handguns and a hunting knife has led to the currently top-trending hashtag on Twitter: #Pray4Orlando

We will continue to update this breaking story as information is confirmed.

UPDATE: At 6:08 a.m., OPD has confirmed "mass casualties" and says the shooter is now dead inside the club.

UPDATE: Police request any witnesses who were at the club around the time of the shooting to come to Orlando Police headquarters at 100 S. Hughey Ave. to share information with investigators.


UPDATE: Police Chief John Mina says "around 20" are dead inside the club, but can't give a specific number. At least 42 people have been transported to hospitals around the city. The FBI will be investigating the incident, with OPD assistance. Florida Department of Law Enforcement spokesman Danny Banks says, "This is being considered an act of terrorism." Police investigators called the shooter "well-organized" and say he is not from Florida. Because this was an assault and hostage situation in a gay nightclub, it may be investigated as a hate crime.

A uniformed police officer was working inside the club and initially engaged with the shooter. After hearing from people inside the club that they were being held in a "hostage situation," members of the OPD SWAT team entered the club after using a "distractionary device" (that was the explosion heard around 5 a.m.) and exchanged gunfire with him. One police officer received facial injuries, but was protected by his body armor Kevlar helmet.

. @ChiefJohnMina multiple people dead inside the club. Many casualties transported to hospitals. pic.twitter.com/0Lf69tClad


Mayor Buddy Dyer calls Orlando a "strong, resilient community" and says "we need to stand strong, we need to be supportive of the victims and their families."

. @orlandomayor Our community is strong. We will need to help each other's get through this. pic.twitter.com/SizOT6xl4D

OPD says there will be another press conference with updated information at 9:30 a.m.