Chakra Khan debut proves it's the best, most modern Solillaquists spinoff yet (The Venue)

Last year, Alexandra Sarton and DiViNCi of the illustrious Solillaquists of Sound peeped an interestingly abstract jazz-inspired performance at Lil Indies. Now, they’ve officially emerged as Chakra Khan, and – as their recorded product and grand coming out (June 11, The Venue) prove – they’re a more realized and crystallized union.

Their music is a futurist ride straddling electronic and soul with trap, jazz and tribal accents. It’s an orbital, disembodied trip of sensuality and spirituality. Its suspended, heady hues show an outlook that’s very now. But instead of the murk of some of their contemporaries, theirs is a vision rendered with the kind of clarity befitting their degree of craft.

The record release event was also their live debut. With Sarton’s classical vocal execution and DiViNCi’s groundbreaking digital virtuosity, the performance aspect of the show was practically guaranteed. But to really mark the occasion, they added the full pageantry of a four-singer corps from the Sarton-led lady choir of Beautiful Chorus and a company of contemporary dancers from Raskin Dance Studio to help bring the show.

Chakra Khan is probably the best, most truly modern Solillaquists spinoff yet. Both individually and collaboratively, the Solillaquists are restless artists who constantly throw off creative sparks with new experiments popping up all the time, and they’re always noteworthy. But Chakra Khan is a fully conceived, next-level project. It was met with the anticipation of a maxed venue and it brought down the house.

Because Sarton is one of the most proactive local champions of feminine force, the night’s bill was virtually an all-female parade of area talent, with DiViNCi and Drew Yardis being the only peanut M&Ms on stage all night. Particularly evocative performances were by Zoya Zafar, who really impressed me for the second time this year, and Yardis and Stephan, whom you can see yourself this Wednesday at the Imperial. 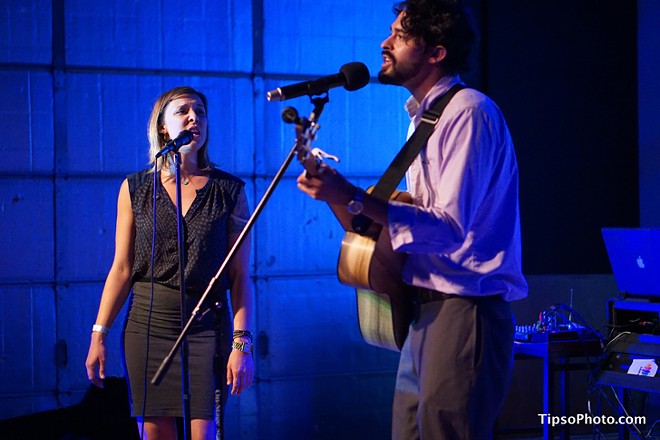