Orlando saw the worst mass shooting in U.S. history early Sunday morning with 50 people dead and 53 wounded after 29-year-old Omar Mateen opened fire on more than 300 people attending Latin night at the gay nightclub Pulse. There's still a lot of unanswered questions, but here's what we know so far.

If you're still looking for a loved one, check back here for updates. In a tragic scene late Sunday, people gathered at the Hampton Inn & Suites near Orlando Regional Medical Center cried out in anguish and wept at hearing the fate of their family members. Most of the victims and their families are Latino. Many were disappointed after officials only gave the names of the wounded and did not confirm all the dead. Family members still looking for their loved ones are being asked to report to the Beardall Senior Center at 800 S. Delaney Ave. at 10 a.m. Monday.

Sara López says she still doesn't know the fate of her friend Jimmy DeJesus Velázquez, 51. Velázquez was a professional Jíbaro dancer from Puerto Rico who traveled the world. López says Velázquez was with at least two friends at Pulse on Sunday morning. His friends told her they heard shooting, but thought it was music until they started seeing people fall down. They tried to grab Velázquez, but he and others were pushed up against the wall by Mateen, who started shooting at the group. His friends ran out to the parking lot, and López says that's the last time Velázquez was seen. 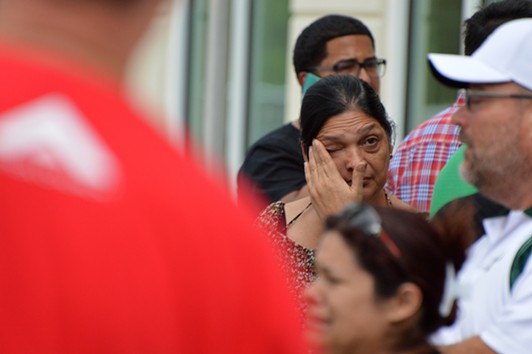 Jaime León was furious and anxious after hearing no news regarding his cousin Luis Daniel Wilson, 39, and his cousin's partner Jean Méndez. The victims' bodies, which were still at the club at the time, have identification that officials could easily look at, León says.  "I just want them to give us closure," he says. "If he's dead, I want to know."
The FBI is taking the lead on the shooting investigation. So far, the timeline from Orlando Police says an OPD officer working extra duty at Pulse responded to shots fired around 2 a.m. Sunday. The officer got into a shootout with Omar Mir Seddique Mateen, of Port St. Lucie, who was armed with a 223-caliber AR-15 type rifle, a 9mm handgun and an explosive device.

The Orlando Sentinel reports two more officers joined in the shootout, and Mateen walked deeper into the club and continued shooting, trapping people inside. On their Facebook page, Pulse Orlando posted, "Everyone get out of pulse and keep running," as hundreds of law enforcement officials began surrounding the club. The Associated Press reports Eddie Justice texted his mother, saying "Mommy I love you," and "In club they shooting." He told her he was trapped in the bathroom and to call 911 because "He's coming. I'm gonna die." One of Justice's last texts to his mother says, "He's a terror."

"Investigators called to the scene told CNN that, hours later, the bodies remained where they had fallen, their cell phones ringing and vibrating, filling the club with the eerie sound of parents trying to reach children who would never pick up," the Tampa Bay Times reports. Around 5 a.m., officials decided to rescue the hostages by driving an armored vehicle through a wall and distracting Mateen with devices that made noise. They were able to rescue 30 hostages while SWAT officers had another shootout with Mateen. Mateen, who reportedly purchased the guns within the last week, was killed by officers' bullets.

"This is probably the most difficult day in the city of Orlando," Dyer told the press.

"We condemn this monstrous attack and offer our heartfelt condolences to the families and loved ones of all those killed or injured," said Rasha Mubarak, the Orlando regional coordinator for CAIR-Florida, in a statement. "The Muslim community joins our fellow Americans in repudiating anyone or any group that would claim to justify or excuse such an appalling act of violence."

Orlando City Commissioner Patty Sheehan, the first openly gay official in Orlando, said, "If you think that you’re going to stab at the heart of us by doing this horrible, violent act, you’re not, because we love." Terry DeCarlo, executive director of The GLBT Center of Central Florida, said he just wanted to "wake up" from the nightmare he was living.  "My knees buckled and I almost went down when I heard it went from 20 [victims] to 50," DeCarlo says. "My heart left my body."
We know some about Omar Mateen, but there are still uncertainties. The FBI told the press Mateen made 911 calls during the attack where he pledged allegiance to ISIS. 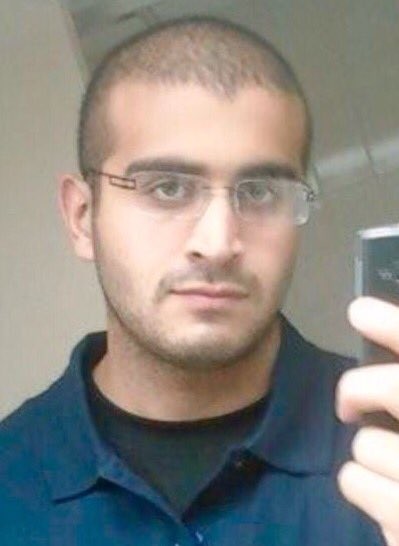 Mateen was born in New York, and FBI officials say they first became aware of him in 2013, when he "made inflammatory comments to co-workers alleging possible terrorist ties," CNN reports. The inconclusive investigation was closed, and in 2014, the FBI contacted Mateen again regarding "possible connections with an American suicide bomber" named Moner Mohammad Abusalha. They let Mateen go again, and he was not under investigation or surveillance currently.

Mateen worked as a security officer with G4S. Mateen's ex-wife, Sitora Yusifiy, said he was an abusive person who beat her, according to the Washington Post. His father, Seddique Mir Mateen, told NBC News he was in "shock" and didn't think the killings had to do with Islam, but with his son's hostility toward gay people. Mateen was angered over a recent incident where he saw two men kissing in Miami.

Gov. Rick Scott called the incident "clearly an act of terror." U.S. Sen. Bill Nelson said ISIS media claimed responsibility for the shooting, but some reports are pointing to Mateen being a lone-wolf attacker. U.S. Sen. Marco Rubio said ISIS was seeking to terrorize us.

President Obama also addressed the shooting, saying he offered Mayor Dyer any resources Orlando needed and calling the mass shooting a "reminder of how easy it is for someone to get their hands on a weapon that lets them shoot people in a school, or in a house of worship, or a movie theater, or in a nightclub."

"We have to decide if that's the kind of country we want to be," Obama said. "And to actively do nothing is a decision as well."

While many vigils in Orlando were postponed, others around the world mourned for us.

Some Orlandoans did gather at Lake Eola to light some candles while bars, clubs, churches and organizations around the city held small gatherings.
We're broken and grieving right now, but through it all, the good in Orlandoans has shined through at blood banks and in supporting the LGBTQ, Latino and Muslim communities.

The City Beautiful will heal, #OrlandoStrong