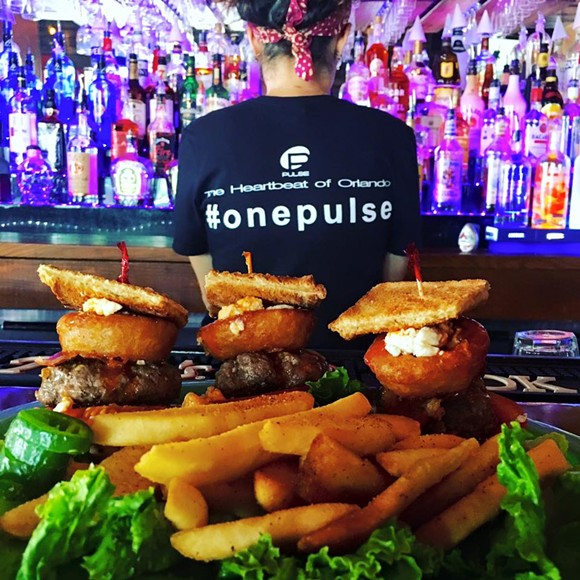 After the Pulse shooting in Orlando, local restaurants and bars are raising funds to help the people most affected by the tragedy.

Below you'll find a list of where and when you can eat and drink for a good cause. We will update this last as more events and fundraisers are announced.

4 Rivers Smokehouse For the first time ever, the restaurant will be open on a Sunday. The Winter Park location will be open Sunday, June 19, from 11 a.m. to 3 p.m. Proceeds will go toward the OneOrlando Fund.

In Winter Park, the owners of 310 Lakeside, 310 Park South, 310 Nona and blu on the avenue will donate 20 percent of all proceeds from their Sunday, June 19, brunch service (10 a.m.-3 p.m.) to the staff of Pulse through the Employees of Pulse GoFundMe.

Friendly Confines will have an all-day event, hosted by Vaudeville Central Florida Improv & Performing Arts, on Saturday, June 18, at the S. Orange Ave. location. All proceeds collected will be donated to Equality Florida and all tips collected by the Friendly Confines staff will be matched by the restaurant's owner and donated the Pulse Nightclub employees.


Cigar City Brewing will start the Let's Get Beers Together Session IPA next week at different locations throughout Orlando like Will's Pub, The Hammered Lamb and more. All of the proceeds will go to the OneOrlando Fund. A dollar from every beer sold in the tasting room from Friday to Sunday will go to the OneOrlando Fund. Also, their distributor, Florida Distributing, will donate all of the proceeds from the keg sales.

KrungThep Tea Time will be giving all of their profits to the GoFundMe account set up by Equality Florida until Friday, June 17.

Sus Hi Eatstation From now through Saturday, June 18, 100 percent of their profits, from both UCF and Altamonte Springs locations, will be donated to the GoFundMe Pulse Victims Fund created by Equality Florida. They will also be accepting monetary donations.

Cuba Libre Restaurant & Rum Bar at Pointe Orlando will host a special event titled Bailamos Unidos (We Dance United) on Saturday, June 18, from 10 p.m. to 2:30 a.m. All proceeds from the night’s cover charge will go directly to the OneOrlando Fund to support the needs of the Orlando community in the wake of the tragic events that occurred at Pulse Nightclub. Monetary donations to the OneOrlando Fund will also be accepted at the door. The event will feature DJs spinning merengue, salsa, bachata, and Latin open format music. Cover charge will be $12 for men, and women are free before 11 p.m. with a $10 cover charge after this time.

Pincho Factory will donate 15 percent of all sales from this week to support victims of the tragedy from now to Sunday, June 19.

Jeremiah's Italian Ice will donate 100 percent of all net profits on Monday, June 20, at all 14 Central Florida locations.

Wildside BBQ Bar & Grille will donate all proceeds from their "One City" burger to the victims and families of the shooting.

Food Truck Bazaar On Friday, June 17, the trucks will gather in St. Cloud and on Saturday, June 18, they will be in Sanford. Many trucks are donating percent of profits.

La Empanada Truck will donate 20 percent of sales from events this weekend to Equality Florida's GoFundMe. They'll be at Will's Pub Friday and Saturday nights as well as at the Sanford Food Truck Bazaar on Saturday.

Up in Smoke BBQ food truck will donate 100 percent of profit from Saturday's Sanford Food Truck Bazaar to the OneOrlando fund. Gordon Food Service has partnered with Up in Smoke to donate meat, so net profits will be higher.

Club Revere is having a benefit night on Saturday, June 18, at 8 p.m. There is no cover charge but they are asking for a $5 donation at the door. All donations and profit from drink sales will go to the OneOrlando Fund.

The Geek Easy will host a benefit night on Saturday, June 18, with live music, prize raffles, spoken word and more. All of the proceeds will go to the victims. People willing to donate can also do so online through this GoFundMe.

Treehouse Truck will donate 100 percent of proceeds from sales on Sunday, June 19, to the OneOrlando Fund. They will be serving from noon-2 p.m. at Cast Iron Tattoo on Orange Avenue. Cast Iron Tattoo will be offering tattoos for a $100 donation and piercings for a $30 donation, with 100 percent of donations going to the National Compassion Fund or a charity of equal status.

Sweet City Gelato will donate 10 percent of profits and all of their tips to One Orlando Fund through the end of June.

ORL Food Lab On Tuesday, June 28, the ORL Food Lab event at the East End Market will be a fundraiser to support the OneOrlando Fund. The event is free to attend but donations are appreciated.

CaddyShanks will have a happy hour, benefitting the OneOrlando Fund, at the UCF location on Tuesday, June 21, from 3 p.m. to 5 p.m. A portion of the proceeds will be donated.

Rock & Brews Oviedo is donating 30 percent of the restaurant's total sales on Tuesday, June 21, to the Pulse employees. The staff is donating their tips from the day. There will also be a silent auction.

Juice Bar is donating 100 percent of their sales on Monday, June 20, to the OneOrlando fund.

Restaurant Ash and the Funky Monkey Bistro are donating 20 percent of their total sales on Thursday, June 30, to the OneOrlando fund.

Nova Restaurant will be hosting a fundraiser on Monday, June 20. Tickets are $25 and all proceeds go to the OneOrlando fund.

STK will be featuring the "Orlando Pride" cocktail in which net proceeds will be donated to the OneOrlando Fund at all of their locations. STK and The ONE Group will also be collecting donations from their employees.

Clicks Billiards and Sports Pub will be hosting a fundraising event for the employees of Pulse on Friday, June 24, from 6 p.m. to 2 a.m. All tips will be donated, and they will be raffling Orlando City tickets and Clicks gift cards. They ask that people wear red, orange, yellow, green, blue or purple shirts to show their support.

Ain't Missbehavin Sports and Tiki Bar will be hosting a fundraiser for Pulse Employees on Saturday, July 30, at 3 p.m. There will be a pool tournament and raffles throughout, and all the proceeds will go to Pulse and its employees. They will also be accepting donations every day until the event.

The Sanctum Café is offering its Karma Bowl (usually $9) for $5 throughout the month of June, and donating proceeds to the GoFundMe account.

Sugar Daddy Bakery is offering Pulse Cupcakes, profits of which will all go to EqualityFlorida. If you're interested, they ask that you order the cupcakes 24 hours in advance, since the cupcakes are baked fresh to order. Also, on June 30, they will be donating 10 percent of all coffee sales to Dine Out for Orlando United.


If we missed one, let us know by emailing your event info to dining@orlandoweekly.com