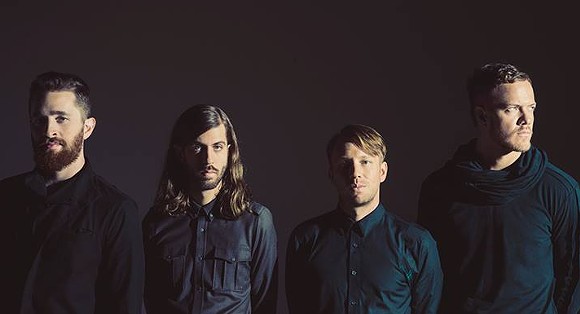 In a a week+ that has already seen scores of local musicians step up and throw a series of benefit shows for the victims of the Pulse massacre and their families.

Now, Imagine Dragons will be headlining the ALL IS ONE Orlando Unity Concert on Wednesday, June 22, (tomorrow!) at Hard Rock Live. Sponsored by GLAAD, iheartmedia, and the Ally Coalition, and also featuring Nate Ruess and Samantha Ronson, every penny raised from this show will be going to the OneOrlando Fund. Guitarist Wayne Sermon corresponded with the Weekly via email to talk about the show.

How did a concert of this scale come together so quickly?

Wayne Sermon: Hard Rock reached out. They've been exceptional partners through the years. They've helped us a lot with our our charity - the Tyler Robinson Foundation. It was no surprise to us when we heard from them. We were both on the same page and knew what needed to be done.

What should people who are coming to this show expect from Imagine Dragons on the night?

We put everything into every show, but this one will be special. Emotions will be high. We're happy to share the stage with Nate Ruess (of fun.). He's a talented guy and was cool to jump on board so quickly. I think what will make this one special is the fact that none of us will be there for ourselves. We know these tickets aren't cheap, but want to assure everyone that every penny is going to help those who have been most affected by this tragedy. No family member should ever have to go through this pain.

It's heartening to see so many benefit shows over the last week (and beyond) - one of the infinite tragic things about this event is that the shooting happened in a safe space where LGBTQ people would go to connect through and find solace in music.

I know. We had a eerily similar feeling when we were in Europe and Bataclan was attacked. We felt shocked and so angry that people would use music venues to spew their hate and fear. To us, it's the ultimate insult. We've worked our whole lives to bring people together with music. To have that torn down is more than we can stand.

Have you been keeping up with news about the citywide responses to the shooting and the aftermath?

It's the ultimate retribution. To have these acts of terror turn a city into a more loving one - more united one. We believe the people who try to spread fear will always be betrayed by their own bigotry. That's why hate will always lose and love and acceptance will. Any act that seeks to divide us will only unify. That's our message.

You encouraged your fans very early on to give blood, but this is a much appreciated next step of support. We hope people come out to honor these victims and support their families. We know there wasn't much time leading up to the event, so thank you for helping us spread the message. The city has really embraced this idea so quickly.

Imagine Dragons, Nate Ruess and Samantha Ronson play the Hard Rock Live tomorrow night at 8:30 p.m. as a fundraiser for Pulse. Tickets ($150) can be purchased here with no Ticketmaster service fees.