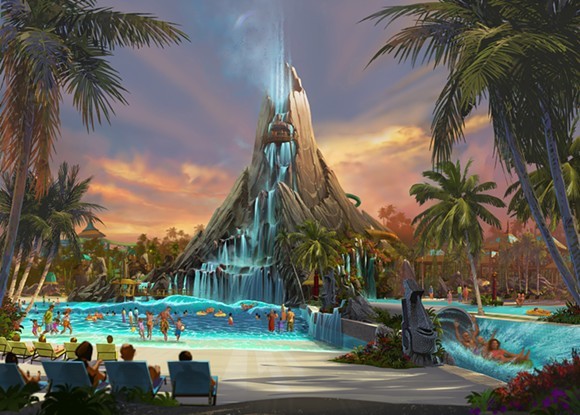 Since the announcement of Volcano Bay back in May of 2015, details have been slim, but Universal Orlando has just released new information on the company's next big water park.

Although an official opening date has not been released, impatient park g0-ers can now start buying a new three-park ticket, for the two theme parks and Volcano Bay, for travel dates beginning June 1, 2017, according to Orlando Business Journal.

Few specifics were released, but the park will be divided into 4 themed areas with a total of 18 new attractions, reports the Orlando Sentinel.

“Volcano Bay will offer 18 unique attractions ranging from the daring to the serene,” said Alice Norsworthy, executive vice president of Universal Orlando Resort. “Including a multidirectional wave pool with sandy beaches, peaceful winding rivers, twisting family raft rides, speeding body slides that drop from the top of that volcano into the waters below and so much more.”

Universal Orlando did however announce an opening date for the resort's newest hotel, Loews Sapphire Falls, on July 14. The Caribbean-inspired hotel will have 1,000 rooms.

In the meantime, early Volcano Bay construction is visible to the west of I-4.