June 23, 2016 at 3:50 PM
comment
Maitland is about to up its restaurant game. In addition to Brandon
McGlamery's restaurant going into the now-gutted SoNapa Grill/Steak & Ale building at 640 S. Orlando Ave., the Maitland City Centre project a couple of blocks up the road will feature a host of restaurants when it opens in mid-2018.

The draw, however, will be a food hall by DoveCote Brasserie chef Clay Miller. Miller says the roughly 5,000-square-foot space will face Independence Lane (not Orlando Avenue) and see at least five independent food vendors set up à la East End Market, and that's in addition to a full-service restaurant run by Miller himself.

The restaurant will serve "New England coastal cuisine," according to Miller and will be very approachable. "I want folks eating out of baskets and paper," he says. Miller is thinking of serving crab rolls from the restaurant as part of the food hall experience as well.

There's a small chance Miller could run and operate all the food stalls in the hall, though he said that would be "unlikely." The name of the food hall is still being discussed, but expect a "by Clay Miller" tagline to be a part of the moniker.

As far as DoveCote Brasserie is concerned, the place will be a stunner thanks to Andrew White, whose firm lot1433 is overseeing the interior design of the restaurant. 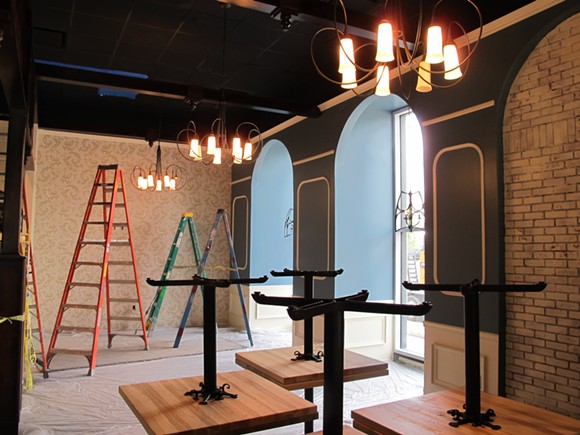 Miller shared DoveCote's menu with me. Some highlights:
DoveCote Brasserie will open July 11.