A mother manatee and her calf were returned back to their natural habitat on June 24 after almost two months of rehabilitation at SeaWorld Orlando.

Back in May, the two manatees were rescued from Ormond Beach by the Florida Fish and Wildlife Conservation Commission then transported to SeaWorld Orlando. 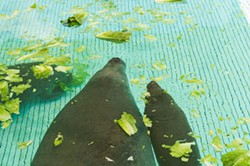 The 10-foot-2-inch long mama manatee had been struck by a motor vehicle, causing her to suffer from a pneumothorax which means air was trapped inside the body cavity.

The injury caused "severe buoyancy issues which could negatively impact her health, eating patterns and the nursing of her calf," says SeaWorld Orlando.

The baby manatee, measuring four feet and five inches long, was not harmed by the water craft but is still dependent on his mother which is why the pair has remained side-by-side during the rehabilitation process.

The manatees were returned to Halifax River, near Tomoka State Park in Volusia County.