This is the most poorly planned neighborhood in Orlando 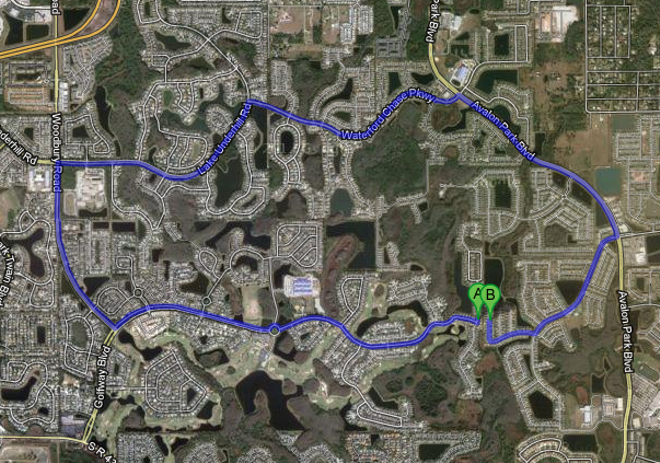 Many of Orlando's neighborhoods have an overabundance of cul-de-sacs, circular drives and dead ends.

However, one section of Avalon Park Eastwood, which is just east of Orlando, is laid out so poorly that if you tossed a Frisbee over your neighbor's fence it would require a two hour walk to get it back.

As first pointed out by Angie Schmitt of streetsblog.org, the two homes marked above share a back yard and are only 50 feet apart, but even so, a Frisbee-retrieving expedition would cover nearly 7 miles, and would be at least a twenty minute drive.

It's important to remember that just about all of Florida is covered from end to end with lakes, ponds and puddles, so a grid system is easier said than done.

But still, there's a price to pay for unwalkable, poorly planned neighborhoods.


"Windy street patterns, full of cul-de-sacs and circles, have become such a ubiquitous feature of the suburbs that they mostly escape remark. But disconnected streets have many insidious consequences for the environment, public health, and social equity.

For one, the lack of a functional street grid funnels traffic onto wide arterial roads — which tend to be the most dangerous places for pedestrians. Furthermore, disconnected streets discourage trips by foot or bike. People who can drive have no incentive to walk or bike anywhere because the trips would be too long and dangerous, while people who can’t drive are effectively trapped in their own homes, or are highly dependent on caretakers."

Schmitt goes on to mention that the number one Sustainable Street Network principle, created by The Congress for the New Urbanism (or CNU),  is to “create a street network that supports communities and places.”

However, current urban planning conventions, like most or Orlando's suburban sprawl, favors building individual segments of roads, as opposed to a well-planned network of streets.

The CNU actually offers training on Street Network Principles for communities and transportation professionals.  "Someone with influence in suburban Orlando needs to take that course," recommends Schmitt.