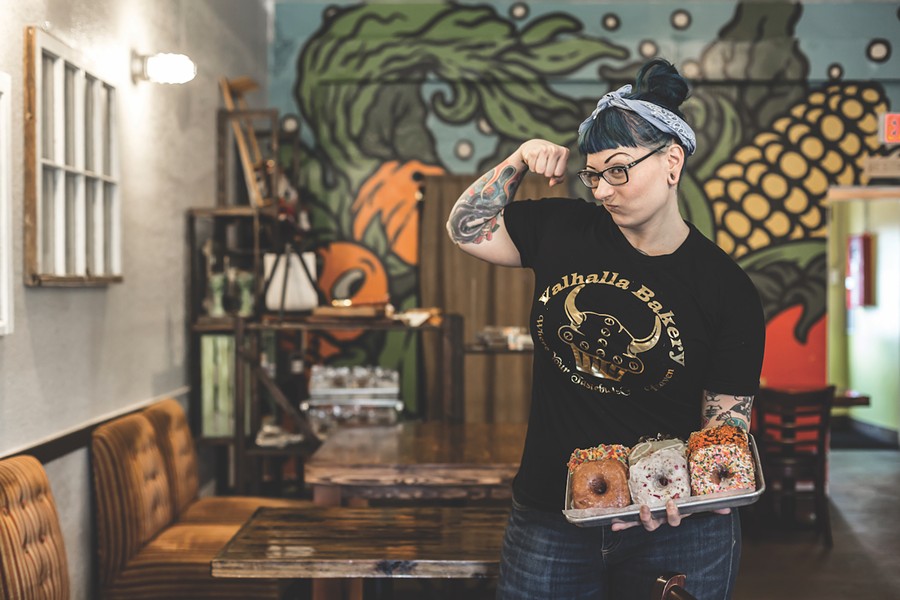 It's interesting to us that the doughnut trend, so entrenched in other cities, hasn't quite found its wings in Orlando yet. (It seems nothing can topple boring cupcakes off their boring throne.) Other than Donut King – amazing sinkers, but not exactly a hipster joint – and Krispy Kreme – undeniable, but not super-varied or indie – the most creative and popular doughnuts in Orlando are, gasp, vegan.

Market on South has a line out the door on weekend mornings for customers desperate to get their paws on Valhalla Bakery's doughnuts in flavors like Fruity Pebbz, Butterfinger, peanut butter Oreo, churro and passionfruit-toasted coconut. Valhalla baker-owner Celine Duvoisin admits, however, that her most popular product "was an accident."

"Someone asked me to make them, so we did. And then this happened," Duvoisin deadpans. "This" refers to the lines out the door, the customers flying in from other states just to try Valhalla's doughnuts, even the Waka Flocka Flame video in praise. (Valhalla shouldn't be overlooked as a source of all types of pastry, as well as custom-decorated cakes.)

So it's no surprise she's spinning off a stand-alone — although Valhalla will remain at Market on South, and still serve the goods. In keeping with the Viking theme, she's calling this one Valkyrie. (OW: "How/why did you choose Valhalla as a name?" Duvoisin: "Because I refuse to fail. Victory or Valhalla!")

Valkyrie Doughnuts will open around Thanksgiving at 12226 Corporate Blvd. (near UCF) serving, uh, doughnuts, but also soft serve or ice cream, other "frozen novelties" and "some fun drinks." Follow Valhalla and Valkyrie on Instagram to monitor progress. In the meantime, Market on South is open 8 a.m. to midnight Monday through Saturday and 11 a.m. to 4 p.m. Sunday, but don't count on doughnuts being available past the first few hours of business.