The tiki party is the latest themed experiment by the inventive party-makers at the Will’s Pub/Lil Indies complex. Will’s Lil’ Tiki Party (June 26) was originally conceived as an offsite satellite party, an interesting concept for an event series and proof that this bar brain trust has both ideas and a following. But the original site of lakefront venue Lake Holden Gardens fell through due to permitting issues.

How much ended up being conceded is incredibly hard to imagine after seeing how this party turned out because Will’s Pub was transformed into a tiki set in one of the most complete atmosphere takeovers I’ve ever seen here. From the poke food truck outside (Da Kine Poke) to the great vintage Hawaiian visuals to all the bamboo, fronds and coconuts covering the walls, ceiling and even the sound booth, it was total immersion. 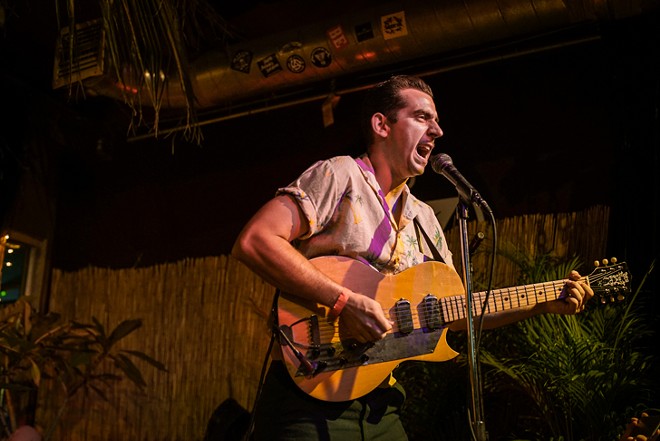 The ultimate testament to the idea’s appeal is that people answered the call and matched the spirit by turning out in number and wearing enough aloha patterns to do some permanent damage to my retinas and making me feel a little slack for only mustering a Bleubird T-shirt with a couple palm trees on it. But I did drink out of this ridiculous thing all night long, so there:

That little indignity there should count for some spirit points.

It would hardly be a Will’s event without live music, and this one was rousingly soundtracked by excellent locals like soul bombers the Sh-Booms and garage rockabillies the Wildtones. 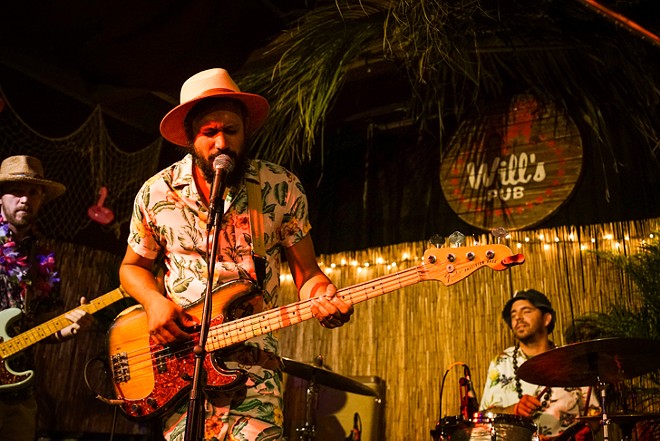 The one band I hadn’t yet encountered before was new Orlando group the Uke-A-Ladies. The clever name pretty much spells out their deal. With the fetching setup of an all-female ukelele trio, all they’d have to have is basic competence to win some hearts. I know what you’re thinking, though, it’s gonna be twee. And between their obvious charm and pop covers of artists like Meghan Trainor, it sometimes was. 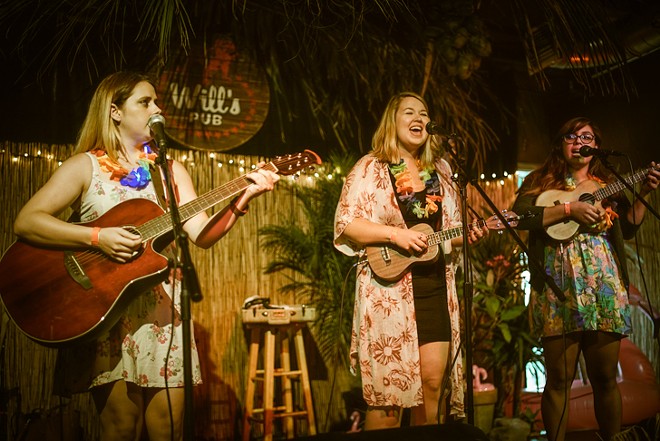 But where so many like them would’ve gladly settled for the lovely conceit of a cutie-pie act, the Uke-A-Ladies are actually much more. They’ve got an undeniable hook but they’re no novelty act that just tickles your fancy and rots your teeth. Any band with three members who are solid players, good singers and great harmonizers is something to be taken with some gravity. What’s more, they feature a good amount of nice original material and do some deeper covers. Check this seriously legit rendition of Dolly Parton’s “Jolene”:


They’re sweet, yes. More importantly, though, they’re talented. And you should keep an eye out for them.

Without a doubt, the festivities were especially boosted by the rare synergy of some spillover from the farewell show by local comedian and music-scene vet Larry Fulford earlier that day at the venue’s matinee event (The Shady Brunch Comedy Show), something that the Uke-A-Ladies acknowledged with a shout-out to the man. But the affair was a success on its own merit as a grand splash of great music, festive local vibe and kitschy haole fun. 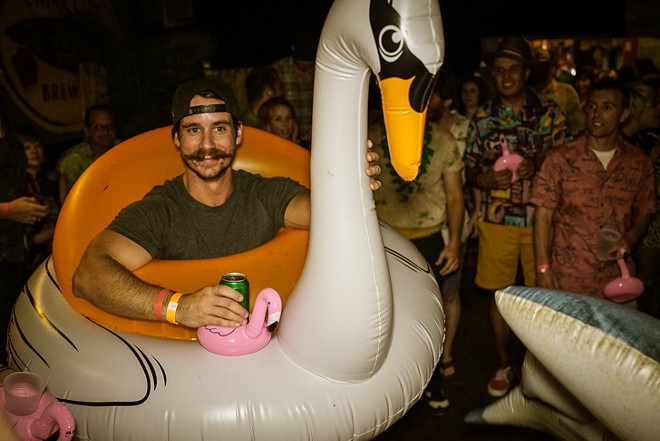 Before you go thinking this was too vanilla, though, keep in mind the context. I’m not talking about just any tiki party (nor would I ever). I’m talking about a tiki party in the Will’s Pub universe, which means that typical beach party things like beach balls and pool inflatables among the crowd sometimes resulted in situations that went from wild to violent.

This was neither basic show nor mere social. It was a true event. Summer’s officially here, party people. God help us all.