Don't mind if I do: An interview with Boy George 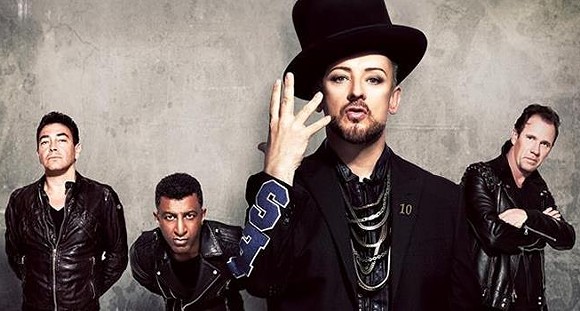 Orlando Weekly: Was there any particular reason or milestone behind this Culture Club reunion? How is it going?

Boy George: There's no real reason! We’re not trying to take over the world or anything. The rules that other people live by don’t really apply to us anymore. We don’t have a radio schedule, we don’t have a record label as such, there’s no one telling us what to do. We do things when they work. It’s liberating.

I'm enjoying this tour. We went to Japan, which I haven’t been to in 16 years. We just got back from there. I love Japan. I consider Japan, because I practice Japanese Buddhism, my spiritual home. And Japanese audiences are amazing. As soon as you walk onstage they’re having the best time ever. While we were playing, I looked over at Roy and said, “Can we just stay here?” [laughter]

Your voice hasn't lost a step. Do you do anything to preserve it?

Nothing! I’ve been living! Obviously when you’re on tour, there’re days when you don’t speak. Literally don’t speak. And that can be a great relief for everybody around you! [laughter]

But it’s really enlightening when you don’t speak. I think you actually become more tolerant, things annoy you less. Because you kind of go into this vacuum. It’s actually quite liberating. It’s my favorite new word, liberating … [laughter]

Are there any singers that particularly inspire you?

Although I’m kind of considered a soul singer I listen to a lot of rock music. There’s a playlist on Spotify I did called "Perfect Pop." It’s not pop. [laughter] but it’s pop to me. It’s the stuff I listen to – the Ramones, Mink DeVille, Siouxsie and the Banshees. Do you know that song "Blank Generation"?

I’ve been getting back into a lot of that stuff lately! That song … you know how when you’re a kid you think you know the lyrics, right? And then later you actually take a look – they’re SO out there! They’re fucking brilliant, like mad poetry!

How do you find fresh inspiration when revisiting the Culture Club songs?

We don’t do this all the time, so I have a lot of breaks from this. So I get excited when I get the chance to revisit these songs. I have a good relationship with those songs, really. The inspiration is the [audience] reaction to a song, you know?

You grew up in the punk and New Romantic scenes; do you still sort of apply that DIY ethic to your work?

I always joke that I’m a punk, you know, because I do sort of put things together myself, I follow my own rules, I never want to go onstage with something that someone else might wear! [laughter] I’m not a big label person, I err more towards style than fashion. Fashion is wearing money. “Look at how much my outfit cost!” I’d much prefer to have something made – it might cost more, actually – but at least I know that no one else is going to have it. That’s my motivation.

Have you done any DJing lately? What makes a good DJ set?

I did just do a DJ set in Australia, in Sydney, and I played Café Del Mar, which is this great club, absolutely brilliant. It's a proper old-school rave, house music venue … you know how so many of these dance clubs are too programmed, readymade? It’s not the same thing that I was part of as a DJ, so occasionally I’ll get cool gigs that I’ll do, but I don’t DJ as much as I used to.

A good set is people responding to what you’re playing, and not coming up and asking you to play something that you don’t like! “Can you play this?” No! If you want to be a DJ, go and be a DJ, I’m DJing right now. I’m not a jukebox, you don’t pop a coin in my mouth and pull my arm! I’ve been doing this for a long time, I know how to do it. It's whether people are open-minded and whether they like house music. If you don’t like house music, you won’t like my set.

What's next for you?

After this tour, which goes on until September, a short break. Then more American dates. This is my big touring year. And then next year, I’m on The Apprentice … [laughter] I’ll be on your TV set every week for 14 weeks. I'm looking forward to that.