The Broadway hit musical Fun Home, based on Alison Bechdel's excellent graphic novel of the same name, is coming to Orlando for one night only on July 24. The producers of the Tony award-winning show have put together a concert version with all nine of the onstage company members to benefit victims of the Pulse shootings. 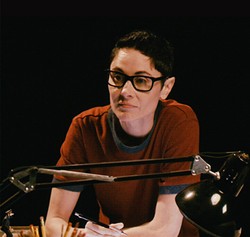 "As the first musical with a lesbian protagonist, we so often hear from audience members at Fun Home that it was the first time they saw themselves represented on a Broadway stage," say producers Kristin Caskey, Mike Isaacson and Barbara Whitman. "We all feel so helpless, but hopefully this will allow us to give back to the LGBT community in this tiny way."

One hundred percent of the net proceeds of this benefit performance will support the future work of Equality Florida and the victims of the Pulse shooting. "Half of the money raised will be distributed directly to victims of their families, and half will support Equality Florida’s work to end discrimination based on sexual orientation and gender identity," a spokesman for the Dr. Phillips Center said in a statement today.