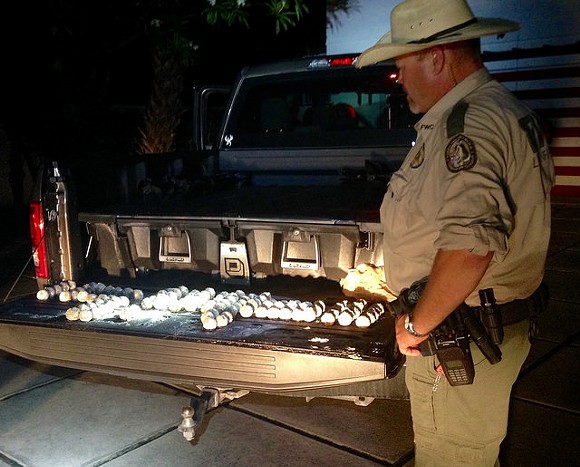 A man is being accused of snatching over 100 sea turtle eggs in Jupiter Island, Florida.

Biologists contacted Florida Fish and Wildlife Conservation law enforcement after they heard there was someone poaching sea turtle eggs from a beach behind a residence, according to FWC's Facebook page.

After a few days of monitoring the area for illegal activity, the officers saw a man taking eggs from a female loggerhead sea turtle. The man was arrested on Friday, July 1, with 107 eggs in possession.

The possible turtle egg thief was taken to Palm Beach County Jail where he faces a third degree felony charge, which is punishable by up to five years in prison, and a fine up to $5,000, according to FWC's Facebook page.

The man remains in jail with a $3,000 bond, according to the Orlando Sentinel.

Fifteen of the eggs are being kept for evidence and DNA testing while the remaining eggs were reburied by the Florida Fish and Wildlife Conservation's biologists.