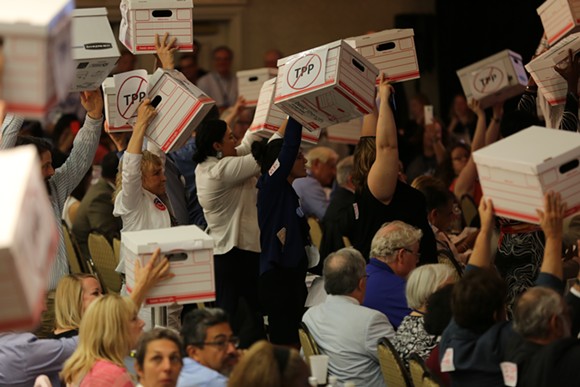 Amid many boos and screams of "shame," U.S. Sen. Bernie Sanders' delegates could not get sufficient votes to include several key progressive positions in the final meeting of the Democratic platform in Orlando, including an explicit condemnation of the Trans-Pacific Partnership, but were able to get support for a $15 federal minimum wage.

The TPP, a free trade agreement between the U.S. and 11 other countries, has been a point of contention for supporters of Sanders and Democratic presumptive nominee Hillary Clinton. Although Clinton has come out against the TPP, President Obama has consistently touted the merits of the agreement.

Sanders supporters say the legislation kills jobs and could be a weak point in the general election because Republican presumptive nominee Donald Trump has come out against the agreement, but other Democrats seem to want to avoid embarrassing Obama by voting for an amendment completely opposing the TPP. Instead, the majority of Democrats voted on an amendment that opposes "trade agreements that do not support good American jobs, raise wages and improve our national security," and that these standards should be applied to all trade agreements, including the TPP.

After tense discussions, Cornel West and other progressives also failed to get an amendment included in the platform asking for "an end to occupation and illegal settlements" in Palestine.

Instead of the moratorium on fracking that Sanders' delegates wanted, the amendment passed says fracking should not happen in local governments that object to the practice. But progressives did get environmental concessions on pricing for carbon dioxide emissions and a rejection of the Keystone XL pipeline. The Democratic platform also includes some key wins for both sides of the party. Aside from agreeing to support a $15 federal hourly minimum wage, Benjamin Crump, the attorney for the family of Trayvon Martin, and former NAACP president Ben Jealous united the party to support a police-reform amendment that calls for the use of body cameras, the end of racial profiling and stopping "the use of weapons of war that have no place in our communities."

Progressives also won a close vote on an amendment calling for a "reasoned pathway to future legalization" of marijuana and language calling for the drug to be downgraded from category 1 in the federal Controlled Substances Act.

At one point in the hours-long debate, Sanders' delegate Nina Turner told the crowd, "I’d like to welcome you to the new Democratic party." After the political fights were over in the early hours of Sunday morning, Democrats touted their positions as the "most progressive platform in party history."

"From Washington, to Phoenix, to St. Louis, and now in Orlando, the members of the Drafting and the full Platform Committee have brought the broad spectrum of our party and the best ideas of our campaigns to our party's platform," says Debbie Wasserman Schultz, chair of the Democratic National Committee, in a statement. "They've done it with healthy and enthusiastic debate, and ultimately proved without a doubt that we are stronger together. After five and a half years as Chair of the DNC, I could not be more proud of the fact that this platform is poised to be the most progressive, inclusive and ambitious one in the Democratic Party’s history."