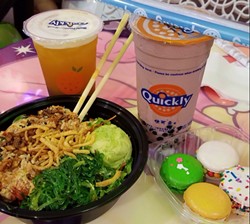 Proving they've been able to work magic in the corner spot off Maguire and East Colonial (the place is seemingly always packed), the owners of Quickly Boba & Snow have revealed that they're planning more than just the one new location on Universal Boulevard, which is tentatively slated to open in September.

In fact, they're planning three more Quickly locations between 2017 and 2018, as well as a market kiosk at 1st Spring Oriental Market in East Orlando.

There's already a Boy Kong mural (complete with lucky cat and poke bowl) adorning the walls of the Universal Boulevard location, and the Windemere location is in the rendering stage and will feature ultra-comfy booths.

Also be on the lookout for Orlando's first authentic purikura, a Japanese photo booth, at the Universal Boulevard location (think: customizable Snapchat filters meet full-length arcade-style photo booth). You'll know where it is because there will be a line out the door.