Four ways to celebrate Bastille Day in Orlando this year 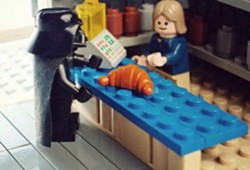 On July 14, the French celebrate Bastille Day, which commemorates the beginning of the French Revolution that began with the storming of the Bastille fortress.

Across the pond, they get the day off and there are tons of fireworks, but there are a few ways Francophiles can celebrate on this side of the Atlantic. Mainly, eat. Here are four ways to get your liberté, égalité, fraternité on between now and Sunday.

1. Eat a croissant at Backhaus
It doesn't get much Frenchier than a croissant, and we named the ones at this German bakery the best in Orlando last year (part of France speaks German anyway, so it still works). They're perfectly flaky on the outside and impossibly buttery on the inside. Pull one side away from the center and you'll unleash the golden cylinder like a relic in the center of Saint Chapelle.

3. Have a croque monsieur from Croissant Gourmet for lunch
Or a croque madame (same, just has a fried egg on top). The croque monsieur is a ham and cheese sandwich — slathered with butter, bien sûr — toasted and topped with Gruyere-spiked bechamel, then broiled under super-high heat. C'est chouette.

4. Celebrate Independence Day and Bastille Day together at the Alliance Francaise of Greater Orlando
On Saturday, July 16, the Alliance Francaise of Greater Orlando will host a joint celebration of Independence Day (the American one) and Bastille Day with live music by French crooner Tangi Colombel, a raffle, paella and wine, plus plenty of patisserie.