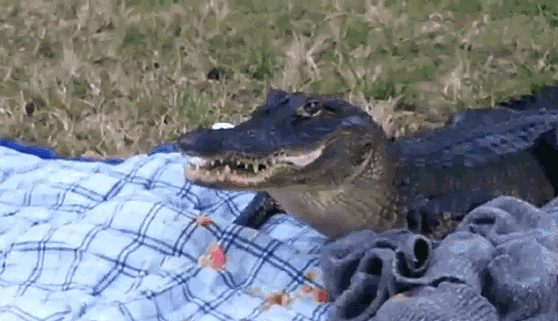 A Coconut Grove resident is fighting to keep his beloved pet alligator, Gwendolyn, whom he's fed junk food for 47 years.

After an incident in 1994, which involved Gwendolyn escaping, owner David Van Buren served jail time. Now the, the retired fire fighter, who has since obtained a FWC permit for Gwendolyn, is under a new investigation.

On Thursday, July 14, authorities stormed Van Buren's resident, claiming the gator was illegal. “If they had a problem with the judge’s ruling, they should have said something 22 years ago,” he said to the Miami Herald.

Gwendolyn, who despite his name is actually a male alligator, enjoys feasting on pizza, Chips Ahoy, and lemon pepper chicken from Costco. He also measures about 13 feet, reports UPI.

“It’s under investigation right now,” said FWC spokesperson Lorenzo Veloz to the Herald. “Our real mission is to make sure that Gwendolyn has the proper care.”

Van Buren has sent all the necessary paper work to the FWC, and now he waits and hopes they'll once again allow him to keep his gator.