July 19, 2016 at 3:37 PM
comment
During a visit with Orlando businesses affected by the Pulse shooting, U.S. Sen. Marco Rubio was confronted by a protester, who in a tense moment, accused the Republican of having blood on his hands.

David Thomas Moran was one of 10 people arrested last week after a peaceful sit-in inside the private building on Orange Avenue where Rubio's public office is located. #SitInForThe49 protesters were demanding Rubio take action on legislation for gun control, LGBTQ protections and safer communities of color. 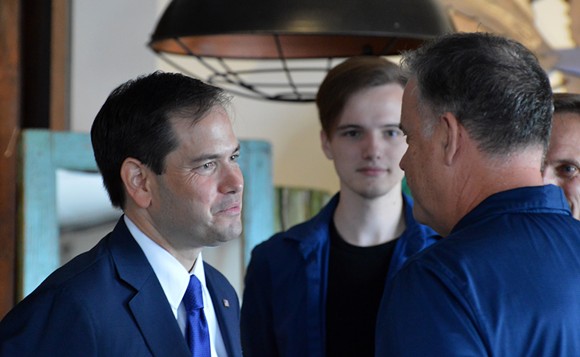 Rubio was visiting Foreign Accents Furniture and Décor, which closed for some time after the shooting, and other businesses who are still feeling the economic effects of the Pulse shooting. Moran went in with the press as 30 protesters demonstrated against Rubio outside. After questions from the media, Moran told Rubio he was a gay man who lost two friends at Pulse and has other friends who barely survived the shooting.

"I'm really angry at you," he said to Rubio. "I don't feel like you're doing anything to support the queer Latinx community that has been so devastated by this, the LGBTQ+ community. I need to know what is your relationship with the NRA. Why are you talking to transphobes and homophobes? ... All of you have blood on your hands."

Rubio, who is running for re-election, said he was in Washington, D.C., during the sit-in and had "nothing to do with the arrests" because his staff is only a tenant in the building. He added that the massacre at Pulse was a terrorist attack, and that he believes the policies Moran and protesters were suggesting would not have prevented the mass shooting.

"I disagree with your assessment," Rubio told Moran. "Homophobia means you’re scared of people. I’m not scared of people. Quite frankly I respect all people. We probably have a disagreement on the definition of marriage.”

“Your policies kill people," the protester said. "Your policies enable people to be murdered. You have to protect us. You’re not protecting us. We’re going to be killed. We're going to be gunned down like what just happened at this club over here You have blood on your hands. You can't deny it.”