Terror No!: An interview with Philadelphia punks Mannequin Pussy 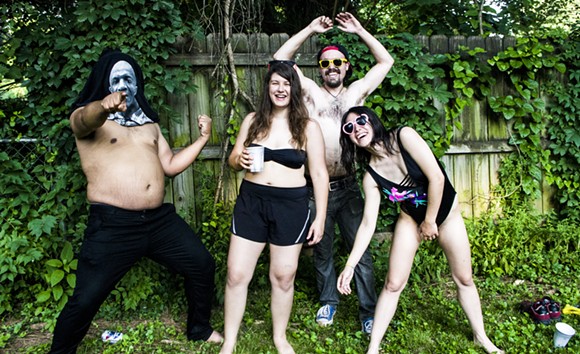 Don't search "Mannequin Pussy" unless you want the Gods of Google to start bombarding you with all sorts of strange and kinky ads. Unless you're an aspiring gynecologist, or a buyer for Fairvilla, these ads will only confuse. "I'm familiar with the flesh light but damn, a whole mannequin to love? That's some commitment," Marisa Dabice, frontwoman for the inspirationally named Mannequin Pussy, comments.

Though the name may imply otherwise, don't go digging out your fetish gear just yet, they're not that kind of band. The Philadelphia-based band blends noisy punk and scuzzy grunge with sweet elements of pop, they could be the nieces and nephews of '90s punks Red Aunts. The band recently added a bassist to the mix and now has "the sickest rhythm section ever," according to Dabice. "It changed everything in a really important way."

With a new album on the horizon (Romantic, Tiny Engines, October 28), the foursome are about to tour up and down the East coast with Stove (Exploding In Sound Records). Here's the jab, though, it's a really weird time to tour. It's no secret that 2016 has been a shitstorm of horror, so how does a band go about the business of playing music in a different city every night? "I'm still figuring that out. Tour isn't really a place to escape your head," Dabice admits. "I feel like we're traveling the country at a very heavy time. Every time there is a shooting, I feel heavier. I thought you were supposed to become desensitized to this shit but I'm getting more and more sensitive all the time. It's been years since I've felt truly panicked about the world."

For a band at the peak of their creativity, the burden of world affairs and politics can be a source of inspiration, as much as it is a source of major frustration and rage. "I'm worried that despite the fact that I feel affected and want things to change, the way I'm living my life doesn't really allow me to actively engage in a way that could create any viable change. I can express myself through art, I can tweet my discontent, but at what point do I just need to stop this, make music on the side and like, run for city council?," Dabice confesses. "I'm so angry with the government, I'm so angry with the mass media in this country ... I hope more people like (Black Lives Matter leader) DeRay Mckesson will start to run for positions of power in government. We need to force more conversation with each other, we need to check in on each other to make sure we're ok. We need to fight for each other because there is so much going in the wrong direction."

There's a lot of fire brewing within the songwriting minds of Mannequin Pussy, a lot of fire that's sure to blaze in their upcoming live shows. If you miss them next week when they play Spacebar (which you shouldn't), take a road trip to Gainesville Halloween weekend and catch 'em at Fest.

Mannequin Pussy play Spacebar on Wednesday, July 27, with support from Stove, Poster and Swept. Tickets are $5.