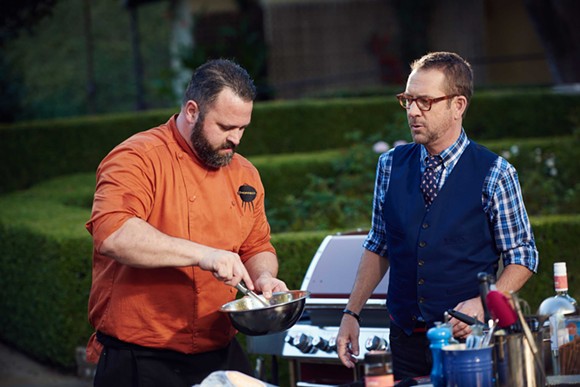 When Chroma Modern Bar, the newest restaurant from Tavistock Restaurant Group (also owners of Lake Nona's Canvas Market & Restaurant), opens this fall, it'll already have a celebrity chef at its helm. Chef Jason Bergeron, who you might have seen this week on Chopped Grill Masters Napa (seen above, chillin' with host Ted Allen), will be the executive chef of the modern American spot.

We asked chef Bergeron some important questions about his philosophies, his hopes for Chroma and what we can look forward to, and what he always keeps in his fridge — inquiring minds want to know.

Orlando Weekly: What do you hope to bring to the Orlando culinary scene with the opening of Chroma Modern Bar?
Jason Bergeron: I love how far Orlando has come in the past 10 years. There are a ton of talented chefs and great restaurants coming on the scene. More than anything, I feel that being a part of that community is important. At Chroma, we won't be trying to reinvent the wheel — only put some nice rims on it, a little Armor All, and ride along in style.

OW: What's your vibe in the kitchen? What leadership qualities mean the most to you as the head of the kitchen?
JB: Generally, I’m the biggest and loudest person in the kitchen. I am a lot of fun to work for. I push my team to be the best and develop them into great cooks. Leadership, as a word, is subjective. Some people feel that once you’re at a certain level, others will just listen to you because you are the boss. But I don’t feel like that. I would rather form relationships with my team and create a family in the kitchen.

OW: What's your vision for Chroma? What kind of food will you highlight?
JB: The menu will be comprised of small plates. The vision is to bring together flavors from across the country and highlight them on a seasonally-inspired menu.

OW: What is your favorite ingredient and your favorite preparation(s) for it?
JB: Pork. I love to make bacon, sausage, charcuterie, the list goes on…

OW: What’s the one thing you always have in your fridge at home?
JB: Beer.

OW: What is your favorite restaurant in town and your favorite dish there?
JB: I’ve only been in Orlando for a few months, but I love the charcuterie plate at Osprey Tavern in Baldwin Park.