Eat This Now: The 'squoctopus' at Seito Sushi Baldwin Park 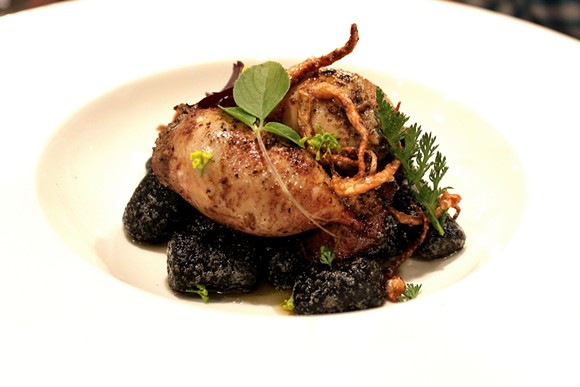 Two weeks ago at Seito Sushi in Baldwin Park, we were lucky enough to be the guinea pigs for an exquisitely prepared cephalopodic composition courtesy executive chef Austin Boyd, one of our town's greatest talents.

The description, like the dish itself, is a mouthful: ground octopus with purple rice and herbs stuffed inside squid, served over a bed of squid-ink gnocchi fashioned from Japanese mountain yam, and crowned with fried squid tentacles.

I won't bother describing the meaty flavor of the octopus (think chorizo), the textural elegance of the gnocchi (think pillows made of velvet), or the ethereal crispiness found in every bite of the fried tentacles, but I will say this: Try it for yourself.

The "squoctopus" is available starting this week (look for it starting Wednesday or Thursday night) on Seito Sushi's izakaya menu for a mere $12 and it, along with chef Hari Pulapaka's lamb belly carbonara we delighted in back in January, is seriously one of the best dishes I've eaten all year.