Sleep delivers one of the biggest, most meaningful music benefits for Pulse victims, also crushes skulls (The Beacham) 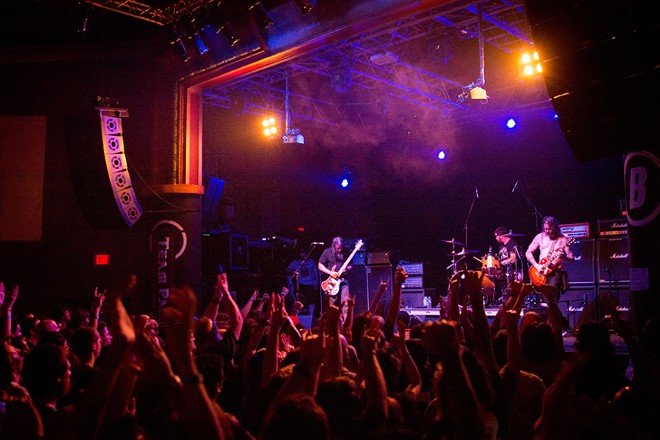 On pure gesture alone, last night's Sleep concert (July 26, The Beacham) is worth superlative note and maximum Orlando respect as a benefit for Pulse victims. Other touring and local acts have graciously donated their hard-earned proceeds to the cause. But making this legendary California stoner-metal band dope times two is that they join the saintly few by traveling all the way here just to do a non-tour, ad hoc special event. Also special is the fact that this is probably the first time anyone has ever called Sleep “saintly.”

Besides a two-set performance, they also organized and held an auction of exclusive celebrity-autographed items like instruments, bikes and wakeboards signed by royalty of the rock and extreme sports worlds, people like Mick Fleetwood, Tony Hawk, Lance Mountain, Mat Hoffman and local wake pioneer Scott Byerly. Because of the big-ticket items on the block, I seriously didn’t expect many to be able to drop that kind of scratch, but people were shelling out hundreds of dollars per item. The magnitude of this city’s largesse continues to floor me. These are my people here. In fact, the benevolence was so widespread that I learned the company through which I have, of all things, my life insurance was matching the show’s proceeds dollar for dollar (go, Thrivent!).

Here's Sleep closing the show by autographing one of their cymbals:

And here's the immediate auction of it that added another $650 to the pile:

Now, I’ll report on benefit shows but I don’t really review them. As a general maxim, I don’t critique because it’s just not appropriate. They’re rallies for causes and not performances for the sake of art. Sleep could’ve gotten up on stage and completely botched their set and this campaign of goodwill would still be angelic. However, I will absolutely note if anything truly exceptional happened. And to Sleep’s credit as musicians, they completely blew the house down in a slow-mo landslide of thrilling tonnage like masters of the universe. Testament to the destruction that three intent stoners and a wall of amp stacks can wreak, the sheer atmospheres they were laying down sat like an elephant on my dome, crushing me so hard that the only thing keeping me breathing was the pure exhilaration.

So to hell with critical distance. The aggregate impact of the band, the cause and the spirit in this full house was just too tremendous to downplay. This night, these guys ruled, this community ruled, and all was on the mend in this cruel fucking world. The unforgivable crimes notwithstanding, a world where the heaviest of metalheads rally this vigorously and in this number to aid the victims at a gay club is a world I want to live in. This is love. Thank you, Sleep. And thanks for answering the call, Orlando.