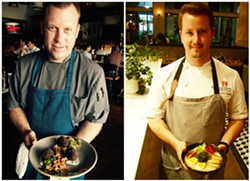 You've got a few days to practice your pucker before it's time to get slurping at Cask & Larder's one-night-only Ramen Pop-Up Dinner on Monday, Aug. 1, from 9 to 11 p.m.

This will be the first specialty dinner hosted by Cask & Larder's new chef de cuisine, Scott Pizzo, who will join forces with his friend Austin Boyd, executive chef at Seito Sushi Baldwin Park. In 2015, C&L offered their first "Ramen After Dark" night from 10 to midnight; this event is a slightly different affair (check that menu!!) but we're happy to see a return to the soup.

Boyd, who won the TastyChomps-sponsored Ramen Rumble in March with his signature tonkotsu ramen, will collaborate with Pizzo on a menu of "several varieties of the traditional Japanese soup with a Southern Cask & Larder twist." The menu, as of Thursday morning, includes: