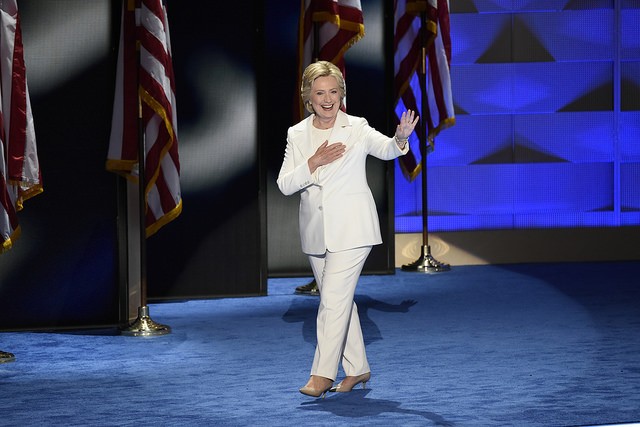 After two fractious weeks in Cleveland and Philadelphia, the final night of the Democratic National Convention on Thursday strove for unity that has eluded both parties, calling on preachers, immigrants and others to vouch for Hillary Clinton and to level withering criticism at Donald Trump.

It was a calculated attempt to try to capitalize on one of the most unusual election seasons in recent American history, one overwhelmed by the bombastic personality of Trump, a real-estate mogul who upended the Republican establishment.

Accepting the Democratic nomination Thursday, Clinton spoke for nearly an hour, reminding the audience of her accomplishments in a political career that has spanned a quarter-century as first lady, U.S. senator and secretary of state. Clinton conceded that some voters still feel like they don't know her.

She laced policy prescriptions with personal anecdotes and criticisms of Trump. At the same time, she tried to cast herself as a candidate of unity in a divided America.

"I will be a president for Democrats, Republicans, independents; for the struggling, the striving, the successful; for all those who vote for me and for those who don't —- for all Americans," she said.

The night was filled with overtures to conservative and centrist voters repelled by the populist candidacy of Trump, who accepted the Republican nomination in Cleveland a week earlier. Delegates waved signs that read simply "Together," along with those bearing Clinton's first name.

In her speech, Clinton hewed closely to the issue profile that she has cultivated over the course of a year, some of it designed to undercut U.S. Sen. Bernie Sanders' primary challenge from the left.

Clinton rejected outright Trump's signature proposal to build a wall on America's border with Mexico in a bid to stop illegal immigration.

"We will not build a wall," she said. "Instead, we will build an economy where everyone who wants a good job can get one. And we'll build a pathway to citizenship for millions of immigrants who are already contributing to our economy."

Clinton's address was also strikingly tough on Trump, who in turn has been harshly critical of the woman he calls "Crooked Hillary." In addition to outlining her policy differences with Trump, Clinton raised doubts about whether the Republican's temperament was suited to the presidency.

"A man you can bait with a tweet is not a man you can trust with nuclear weapons," she said.

Stephen Miller, a Trump policy adviser, slammed Clinton's speech as "an insulting collection of cliches and recycled rhetoric" and said the Democratic nominee skipped over controversies that have dogged her campaign, like her decision to use a private email server during her time as secretary of state.

"She spent the evening talking down to the American people she's looked down on her whole life. ... But in Hillary Clinton's America, millions of people are left out in the cold. She only stands together with the donors and special interests who've bankrolled her entire life," Miller said.

Doubts about Trump were also on display in some of Thursday evening's most theatrical moments. Through the final day of the convention, Clinton's campaign tried to balance promoting a progressive message that would appeal to Sanders' supporters with inching onto Republican turf left open by the unconventional campaign of Trump.

Khizr Khan, a father of a soldier who died in Iraq, blasted Trump for the Republican's proposed temporary ban on immigration by Muslims like Khan.

"Let me ask you: Have you even read the United States Constitution?" Khan said, taking a small booklet out of his jacket. "I will gladly lend you my copy. ... You have sacrificed nothing and no one."

Retired generals and Republicans, including a former official in the administration of President Ronald Reagan, a conservative icon, hammered away at Trump's proposals and called for the country to unite around Clinton. That amplified a speech Wednesday night by former New York City Mayor Michael Bloomberg, who has spent parts of his life as a Republican, Democrat and independent.

Democrats clearly hoped that message would contrast with the Republican National Convention, which featured vivid displays of a rift within the party and a hard-edged take on Clinton.

But for all the efforts to promote the idea of unity in Philadelphia, delegates to the convention didn't deny that there were still divisions in the party —- at least in the hours before Clinton's speech. A small number of Sanders delegates were still wary of the nominee, supporters of both candidates said.

Protests and chants by Sanders supporters were audible almost from the beginning of the convention and continued through Clinton's speech, though it wasn't clear how many of the attempted interruptions Thursday night came from dissatisfied Sanders voters.

Some Sanders delegates staged a walkout Tuesday to demonstrate their unhappiness with Clinton's nomination and the primary process that led to it.

"There's still bitterness, and people have not come to the table," said Florida state Sen. Audrey Gibson, a Jacksonville Democrat who supported Clinton. "I think it's a small minority. ... It's not going to keep Hillary from winning the election."

Sanders delegates said two camps had emerged. Lifelong Democrats who supported the Vermont senator were more likely to rally behind Clinton and work to block Trump from the White House.

But Sanders' message of democratic socialism and a "political revolution" brought together an eclectic group of supporters from scattered parts of the political spectrum. Polls consistently showed him performing best with independent-minded voters who cast ballots in the primary.

"A lot of them just became Democrats," said Samantha Herring, a state committeewoman from Walton County who supported Sanders. "They became a Democrat just to vote for Bernie."

Mitchell Stollberg-Appleyard, a Sanders delegate from Florida's 22nd Congressional District, said he was still concerned about issues like fracking and trade policy. He promised to back the ticket but also hold it accountable.

"The revolution doesn't happen overnight," Stollberg-Appleyard said. "We have to keep working for it. And that I will do. From within the party."