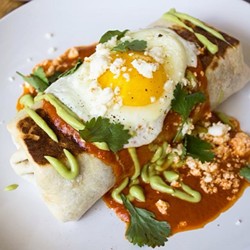 For the last couple weekends in a row, starting on July 16 , Farm + Haus has been popping up at East End Market with a themed brunch menu before they debut their permanent space in late August.

Tomorrow is your last chance to be one of the first to try their brunch offerings, from 10 a.m. to 1 p.m. in the courtyard of East End Market.

Past brunches have featured avocado toast on Old Hearth Bread Co. toast, a chorizo burrito, eggs Benedict with Jamaican bacon and coffee hollandaise, plus plenty of Lineage coffee and Skyebird juice to go around.

If you're looking for something a little boozy to go with brunch (since, as the saying goes, brunch without booze is just a sad, late breakfast), Local Roots is offering fresh fruit mimosas made with local produce and $1 off draft craft beers at the bar.