Kay Odyssey (Aug. 6, Will’s Pub) are a locally connected Austin band that does the psychedelic thing with a little indie glamour, which is the only thing to call it when your drummer plays in a torn-up Bowie tee with a fan up-blowing her hair in seeming slo-mo.

Yeah, they’ve got style and theater but, luckily, they’re more than just that. With some intent and conviction, they manage to stack psych rock, post-punk and glam into a convincingly lush mountain of sound.

The blend gets a little trickier with Orlando band Transcendental Telecom, however. They’ve got some intriguing elements that, in their best moments, interplay like the wool and shimmer of neo-Teenage Fanclub bands like Yuck and Pity Sex. 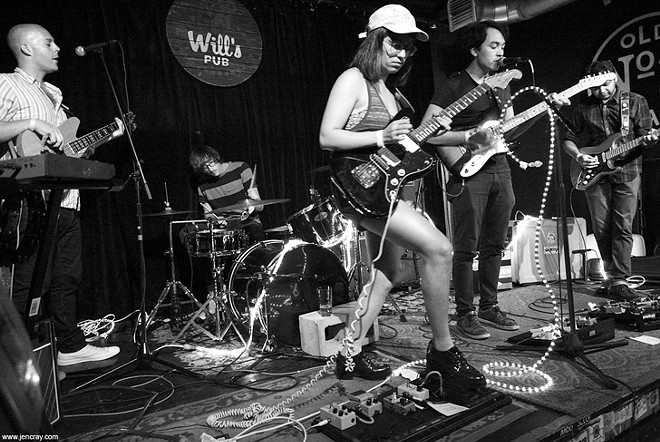 But in their dream-pop cloud-hopping, they have some meandering tendencies that sometimes land them on desultory ground where some shoegaze textures make strange bedfellows with soft rock vibes. A little more decision and incision, perhaps, and they could be on to something. Any band that makes an overt Lush reference in one of their song titles (“Miki Berenyi,” off their brand-new album Etherise) is worth holding out hope for.

And finally, there was Harsh Radish, the curious and unlikely solo act of Russell Parker that mashes together guitars and electronics with almost no regard to their tribal lines, which is enough to root for the guy. For this local, there is no line between producer and rocker. Nothing’s more modern than that. It’s a tack that turns his sweetly honest songs into little things of quirk and wonder. And he may be one of the quickest builders in the loop game, erecting full compositions in the time most are still picking out the bones of the skeleton.