Mickey Mouse might be moving into Hollywood Studios' Chinese Theater

With all the changes at Hollywood Studios, many have long expected some type of update to the park’s central attraction, The Great Movie Ride.

The ride, which goes through iconic scenes in various movies, has been part of the park since it opened in 1989. It’s unique in that many of the films featured in the ride Disney doesn’t own the rights to, but instead bought rights specifically for use in the ride (it actually includes films from every major Hollywood studio except Disney’s crosstown rival Universal).

The slow moving tram-style ride also includes a number of scenes now viewed as rather dated including an animatronic Clint Eastwood smoking a cigarette, this in a scene where a shootout happens, which results in the kidnapping of the ride operator. 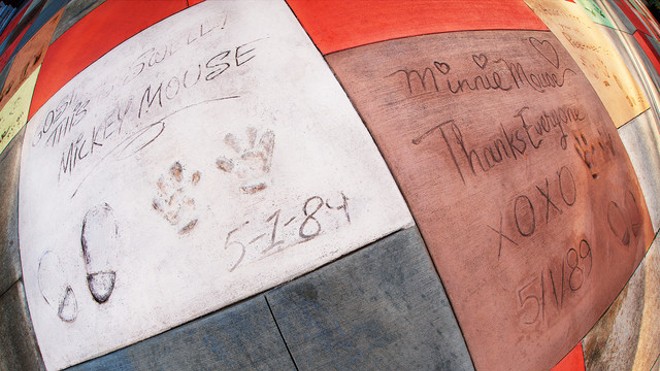 The entire thing looks rather odd from a company that now bans smoking from its family-focused movies as well as guns from its gift shops. The ride is also unique in that it is housed in the park’s most signature building, a replica of the Chinese Theater. The ride has long been expected to close, with rumors ranging from The Incredibles or a mix of Disney films replacing the dated, rather boring ride.

All of those rumors seemed to die when a new sponsorship with Turner Classic Movies was announced in 2014. That sponsorship has been rumored to be ending in 2018. According to some online rumors, the sponsorship did offer the chance for a renewal but that now looks to not be in the cards.

The latest rumors, which made a splash earlier this month after WDWNT posted them in great detail after various hints on message boards, now point to The Great Movie Ride closing next year and being replaced with a brand new ride themed to Mickey Mouse.

There have been plans for a Mickey Mouse ride for years, but amazingly enough, there has yet to be an actual ride based around the famous mouse (well, outside of an odd Ferris Wheel in Disney California Adventure).

There are conflicting reports of the new attraction using the current ride system, or if it will use a new, trackless ride system. The ride will be based around Mickey Mouse drawing major inspiration from Mickey Mouse’s classic cartoons.

No storyline has been leaked yet. There was a Mickey Mouse dark ride designed by former Imagineers that took guests on a studio tour with certain famous scenes from classic Mickey Mouse films. That ride was never built and the drawings were later auctioned off. If the rumors are accurate, the new ride does seem to be an update of that original concept and should open in 2019.