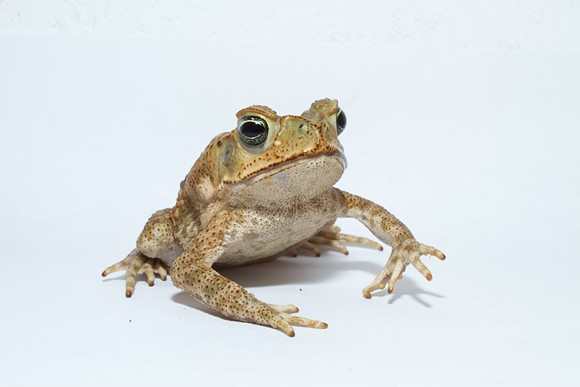 Giant poisonous toads are spreading throughout Florida, and you should probably keep your pets away from them.

Non-native cane toads have started appearing everywhere from the Keys all the way up to Lake Okeechobee, and even Tampa Bay, reports News-Press.

These invasive toads can grow to 10-inches long, and are one of the largest toad species in the world. Florida Fish and Wildlife says that when they feel threatened, the toads excrete a milky poison that oozes from their skin, which can be deadly to animals, especially to anything that tries to eat them (like a dog or cat). They ooze can also irritate the skin and eyes of people.

These toads aren't anything new, they've actually been around for awhile.

The Clearwater Patch reported in April of 2015 that these Central and South American frogs have been in the Sunshine State for decades, spreading to different counties in the Bay area and parts of South Florida.

Cane toads were first introduced in Florida in the '30s and '40s to control pests that harmed sugar cane agriculture according to Florida Fish and Wildlife, and they pose a relatively low threat to Florida's environment and economy.

The only problem is they're extremely hard to kill. According to News-Press, some people have even said that these toads are still alive after being run over by a car. The University of Florida told News-Press that cane toads can be euthanized by rubbing or spraying sunburn spray on their bellies and freezing them in a plastic bag for 24-48 hours. After that, they should be dead.

If you suspect your dog or cat has been poisoned by a cane toad, rinse their mouth immediately with water and you should probably take them to the vet.