Disney's Typhoon Lagoon adds first new attraction in over a decade, but plans to close an old favorite 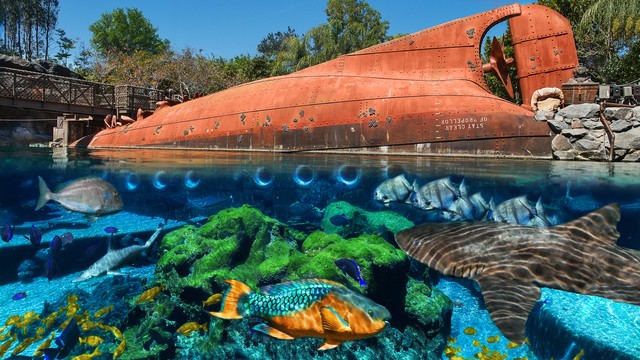 The new family raft ride will feature unique in-ride theming and ground level boarding. Clocking in at over two minutes long, the new raft ride will be one of the longest flume rides in Orlando, but a large part of that time on Miss Fortune Falls is taken up with the unique on-ride lift hill.

But in typical Disney fashion, as they giveth they also taketh away. While we’re getting one of the longest water park flume rides in Disney history, the latest rumors point to Shark Reef closing in the coming months, possibly as soon as next month.

The end of the fiscal year for Disney is September 30. Shark Reef is believed to be closing sometime around that date with it possibly being extended until the park closes for its yearly refurbs on December 25. The park will reopen March 12 with Miss Fortune Falls opening in Spring 2017.

This isn’t the first time the snorkeling and shark viewing attraction has been rumored to be closing. Just two years ago various rumors pointed to a closure when the park went down for its seasonal refurbishment. The attraction reopened with limited hours and the underwater viewing area has been closed sporadically throughout this year.

According to WDW News Today, who broke the news of the most recent timeline for the closing, the attraction’s demise was the increasing maintenance cost. The attraction requires a complete salt water filtration system for a 362,000-gallon dual tank habitat that is filled with sharks, rays and tropical fish. With Miss Fortune Falls opening nearby, now might be the best time for Disney to remove Shark Reef but its’ removal also means that Aquatica would be the only water park in the Orlando area to feature live animal encounters.

In Spring 2017, Volcano Bay will open at Universal with its own highly themed water coaster (very similar to Typhoon Lagoon’s Crush ‘N’ Gusher flume ride) and a similarly sized volcano. With both of its competitors offering unique attractions, Typhoon Lagoon needs to stay unique in the market somehow but is a flume ride with some props enough?

For now, all we know is that we’re getting a new ride and a whole new park just up the road.