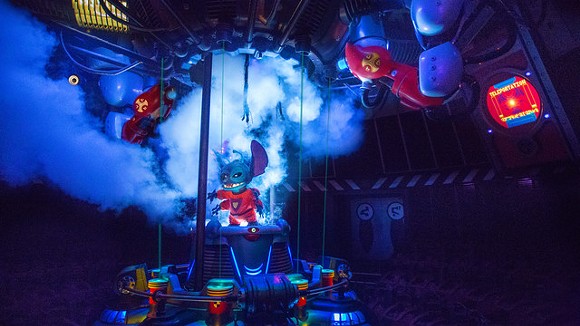 Disney fans seem to agree on few things, but everyone seems to agree that Stitch’s Great Escape attraction in Magic Kingdom’s Tomorrowland flat out sucks.

Touring Plans, a popular theme park navigation app and website, notes that the smelly and annoying attraction is the lowest rated on Walt Disney World property.

The attraction came out of an attempt to make an earlier, much scarier attraction more family friendly. While the original ExtraTERRORestrial Alien Encounter attraction was too intense for Magic Kingdom, Stitch seems less like an actual attraction and more like a bad test mode for 3D theater seats.


Amazingly, Disney has been okay with terrorizing small kids while spraying their parents in the face with chili dog scents for the last 12 years, but now the ugly step child of Magic Kingdom might finally be on its way out.

Two of the more reliable sources on the WDWMagic.com message boards have been sharing some details regarding a new attraction for this space.

While the space has long been rumored to be closing as part of the multi-billion property wide updates, ahead of 50th Anniversary Celebration in 2021, details have been sparse.

Magic Kingdom is rumored to be receiving roughly $350 million of the $3.5 billion that WDW is getting. Anytime updates at Magic Kingdom are considered, Stitch is on the short list of things that need to be updated the most.


The space is rather small so there’s not a lot of room to work with, but the latest rumors seem to indicate that Stitch will be replaced with some sort of interactive 3D attraction, possibly themed to Wreck-It Ralph.

The sequel to the blockbuster 2012 film will open in theaters March 9, 2018. If Stitch closed just past the holiday 2016 rush at WDW that would give Imagineers roughly 15 months to refurb the attraction ahead of the premier of the new film.

Of course, it’s been many years since Disney has timed an attraction to debut at the same time as a film. Frozen, for example, saw its first permeant attraction, Frozen Ever After, open in Epcot this summer, nearly 3 years after the film debuted.


Ironically enough, the gamble to open attractions at the same time as their related films is a move that Legoland is more familiar with. At Legoland Florida, the World of Chima area of the park opened around the same time as the new TV show debuted. The next major ride for Legoland Florida is an interactive 3D attraction based on the Ninjago line. Should the current rumors and plans at Magic Kingdom remain in place past the always present threat of budget cuts, the replacement for Stitch will see similar tech from what Ninjago uses.


Whatever the concept and characters that Disney replaces Stitch with let’s just hope they don’t try promoting this one by TPing the castle again.