— Back in May we reported that Clermont's Wallace Grill would open its second location in the old Fifi's Patisserie/Nick's Italian Kitchen space in the Sanctuary condo building. Turns out owner Glaister "Tony" Wallace will open a restaurant in the space, but it will be a Peruvian concept called Gaviota Seafood & Fine Peruvian Cuisine. Expect the restaurant to open any day now. 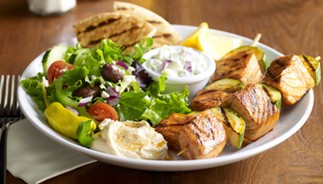 — Fast-casual Mediterranean joint Zoës Kitchen has opened another store on Michigan Street near Orange Avenue, joining their Dr. Phillips, Altamonte Springs and Winter Springs restaurants already open for business. Look for another one coming soon in Millenia Plaza near the Mall at Millenia. The menu skews heavily toward salads and grilled kebabs.